As we were leaving the RV park in Little Rock, the manager asked where we were headed.  When we told her Harrison,her response was "oh, the hometown of the Klu Klux Klan.  Oh bother!
Well, I have to admit that Arkansas seems to be somewhat of a serrated state.  There were lots of black people in Little Rock and very, very little diversity in the northern part of the state.  We have have not experienced or witnessed any incidents.  But we are anglo too.

On Sunday, the bishop of the ward invited us to his dude ranch.  He said we could go zip lining!  All the onions ears pricked up when he whispered the invitation to Eric.
Eric was working.  I took the kids to the dude ranch.  Gorgeous!  100's of acres of land, in a small valley between two hills, in the middle of no where Jasper, AR.  A lodge, office, cabins, horses, ropes course rock climbing type activities, rafting/canoeing (off site), and the 3rd largest zip line in the USA. 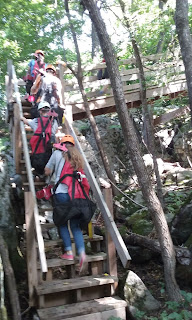 Amelia did not know if she wanted to go.  I didn't necessarily want to, but I didn't show it for her sake.  We rode from the office to near the zip line in an off road vehicle.  Then we got our gear and began walking UP.  We took a break midway through and got into our harnesses. 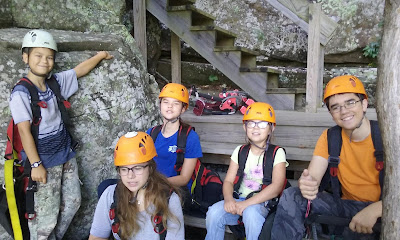 Amelia was not having the best experience and was rather worried.

Her comentary is pretty good too.

But the others were excited! 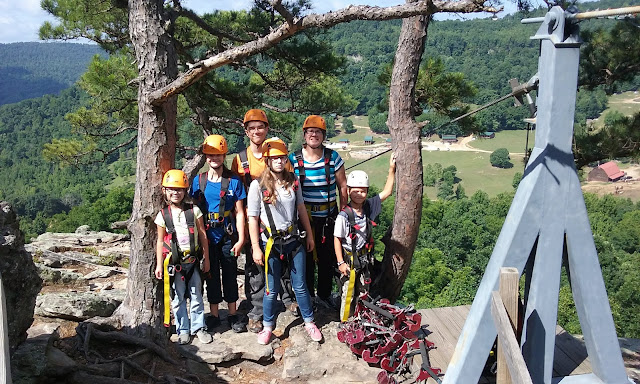 We finally got up to the platform and I suggested the onions should stand in between the trees so I could take their picture.  The zip line guy offered to take a picture of all of us.  Yeah...  there is a drop off behind the two trees.  I did NOT want to go, but I had my big girl pants on to set the example for Amelia. 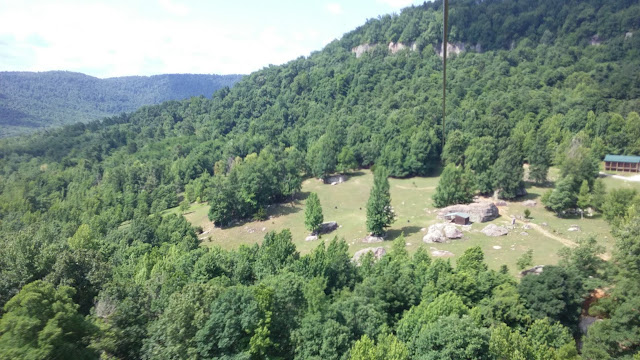 You can watch the onions zip line here.
Amelia is the first to go.  She screamed about 1/2 way and then is quiet.  She started crying.  Poor girly.
Elanor followed and was almost silent, just enjoying the ride.
Scott was next.  The screamed with joy and said "this is amazing."
Naomi followed suit.  Being the lightest, they wondered if Naomi would make it or if they would have to pull her in.  The bishop reached out from the receiving platform and was able to grab hold of Naomi's foot and pull her onto the platform.
Seth was pretty quiet too.

Then came my turn.  Wow a lot of self talk happened, before I left.  So much so that the zip line guy was laughing.  I bet is was rather humerus.
"You can do this, you can do this. (repeated numerous times)
5 people just went and they all made it.
No one died.
Big girl pants on.
You can do this."
Self talk people.  Out loud.

He thought he was filming me, but had paused it instead.  He filmed him getting into his harness when he thought it was paused and did not get the ride down either.  So you don't get to witness it.  Probably for the better.  I was about 3 times louder than Amelia and I screamed the entire time.  I am pretty sure every person, where ever they were in the entire valley heard me screaming.  I came in and almost kicked Naomi and Elanor sitting under the bungee stopper on the line.  Every onion was laughing at me.  I was ever so glad to be off of a "ride."  I was shaking so much, I could not get my helmet off.
I thanked the bishop: "some people come for fun or for the thrill... Today, apparently, I came for terror.   He laughed too.  Yeah, it was pretty bad.
My voice was hoarse for 3+ days!


We went to another cave, well two caves right next to each other.
Sometimes, something is so well advertised that it appears to be awesome, but then turns out that it's not worth it.  This was a private cave and was rather costly to see.  The onions thought they really wanted to go too, but in the end it was not nearly as spectacular as Carlsbad Caverns.  It was kind of like: if you've seen one cave, you've seen them all.  We learned that there are 4,000 registered caves in Arkansas.  And we paid to see this?  Sometimes you live and learn. 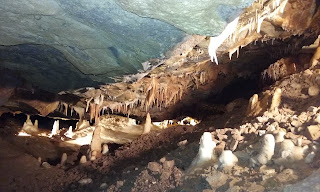 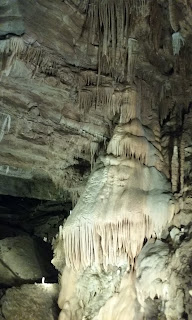 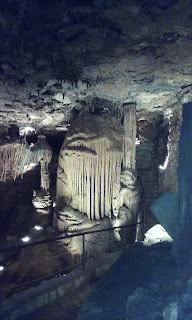 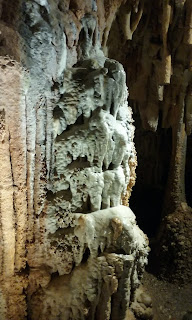 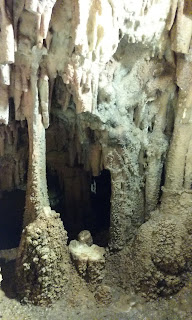 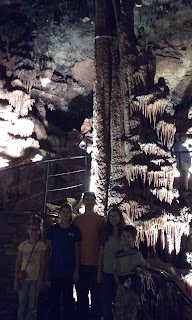 The caves had a lot of damage - broken, and intentionally cut off stalactites and smoke damage.  One of the caves housed an alcohol distillery, a platform for a band, and a dance floor - an underground nightclub.


We looked at a few more properties.  We saw one that is just above our budget and it was Beautiful if you could see past the junk.  Think hoarders.  It was park like with a good mix of woods and grassy areas, pasture, chicken pen, garden area, 4 wheeler trails, a wet weather creek and swimming hole, a pond, and wild blackberries intermingled with poison ivy.  We also saw a little mobile home that we didn't even want to go into.  The hoarders house was very cluttered but relatively clean.  I didn't even want my shoes on the floor int he second one.  I felt gross just being in it for the short time we were.  Then we saw a home on the top of a steep mountain with properties all around that looked like personal junk yards.  Our agent was so nice.  I felt bad that we went to the yucky places.  But you don't know till you look.

On the way back to the RV park, my car died.  Everything shut off - no power steering, and the brakes were funky too.  My agent called.  I told her and tried to start the car while on the phone and it started!  She said she would follow us in.  Se stalled on the highway with no place to pull completely off 2 more times.  We were on a two lane highway with semi trucks passing us with oncoming traffic.   It was extremely scary.  I made sure that the onions kept their seat belts on and the agent did not get out either,  We say prayers every morning that things will go well, but the prayers offered in the car at that time were desperate.

I was able to start the car and pull into a turn off and park and talk to our agent.  When I got in I realized that I had been so focused on not stalling.  So I gave it up.  I told myself that it was totally ok.  Our agent was committed to following us or cramming us in her truck if need be.  She was behind us and would alert on-comers behind us.  I was more at ease.  And you know what?  We didn't stall another time.  We made it to the RV park.  Thank you Cheryl Hensley for being my angel in the flesh! 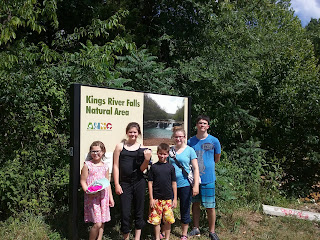 We have a vision board and got it out to look at it when we were discussing the possibility of a cruise - someday.  I was reminded of cliff diving.  So I looked up some fun places to go around the area.  I found one that I thought would be a good starting point.  It was 20 minutes off the highway on dirt county roads that meandered through farms and countryside.  It was an easy mile hike in.  The sight was less than expected.  The water was LOW, about 6 feet low.  The onions were not impressed, but quickly made the best of things. 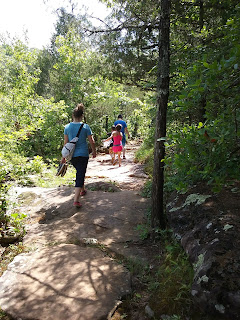 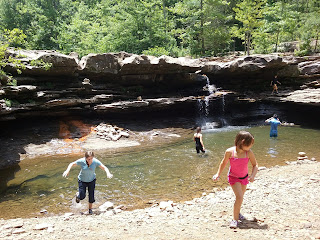 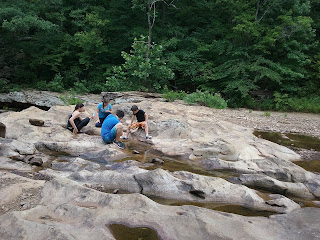 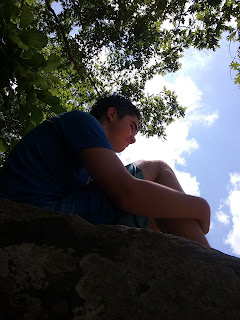 The onions went up on top of the falls and went exploring.  They found frogs, tadpoles, craw fish, catfish, lizards, and even saw one snake as we were walking. 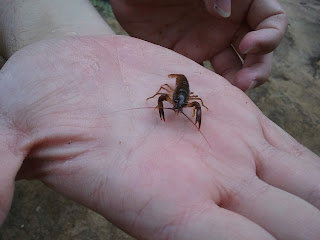 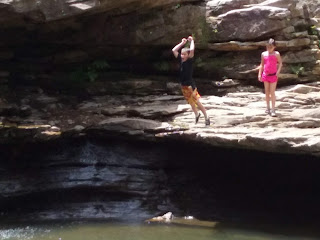 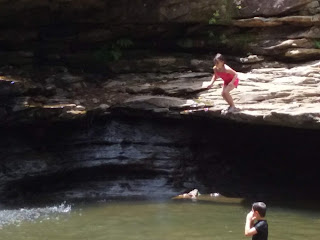 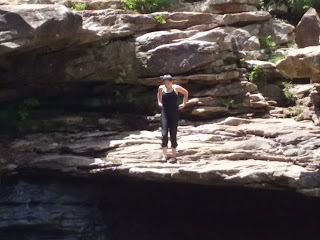 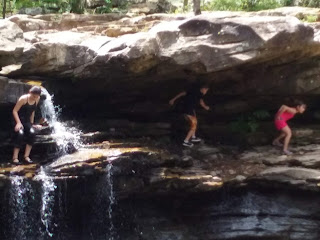 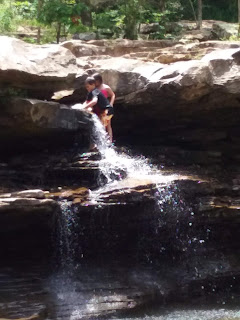 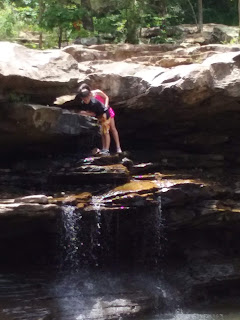 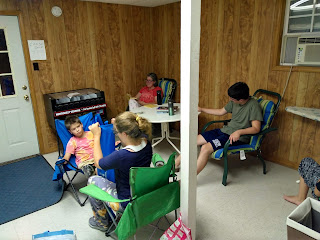 Eric gets to work and live vicariously through us.  But he does get Piglet to keep him company. 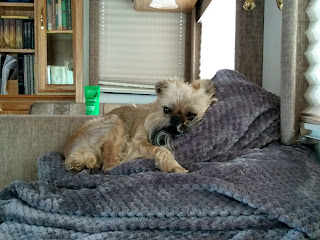 We are onto Cabool, MO today.  Eric's cousin, Linda has a sister in law there.  We have not met and she was willing to have us stay in her home for a week.  I told her we will stay in our RV.  We may even move a little faster since Independence day is on Wednesday and Eric has the day off.

By BackToGeorgics - June 30, 2018
Email ThisBlogThis!Share to TwitterShare to FacebookShare to Pinterest