A mechanic in the family?

The starter on our 1997 (farm/get Seth to work and back) truck went out.  A couple of people said to get under the truck and tap it with a hammer and it might get it going again.
Yes!  That worked.
But it was obvious that we needed a new starter.  Several people said that starters are easy to change out.  Just 2 bolts.  Eric and I were discussing it with our very self reliant neighbors, The Tuckers, and he said not to take it in, that he would change it for us if we didn't want to do it.  Well, that was motivation enough to attempt it.

We got a starter from the auto parts store.  It was suppose to be for the engine and year of our truck.....

Eric was told that there were 2 bolts... and one wire.
So simple!
Just 2 bolts.
He disconnected the wire and got the corroded bolts lose, and learned that the starter was still attached.  What?
There was another wire.
So with one hand holding the weight of the starter he worked quickly to get the other wire free.  It didn't help that I handed him the wrong size socket wrench TWICE.  Oops.

The old starter was not a match to the new starter!
So back to the auto parts store.  The guy at the counter wondered how we even got the starter we bought.  When he looked it up, we were supposed to get a different one. But there were two options.
Decisions decisions.
Why does everything have to be so complicated?  ha ha
The guy got both off the shelf and we matched it up.
Whew.
Back to the truck....

Less that 30 minutes and we had a new starter in.
Yay Eric!
Eric asked me to get in to start it.
Nothing?
"Oh yeah, I have to hook up the battery."
The truck started right up.
Whoot whoot y'all.

There is a song called I'm Rednecker Than You.  (Parody song contains alcohol and chewing tobacco)  We have fun with this song.  We are NOT rednecker than anyone we know in our area.  But we might be rednecker than someone......  LoL
In any event, we are more self reliant in taking care of our truck.

By BackToGeorgics - September 27, 2019 No comments:
Email ThisBlogThis!Share to TwitterShare to FacebookShare to Pinterest

There is an amusement park in Branson, MO - Silver Dollar City.  Through Seth's employment, he gets to go to Silver Dollar City with one guest for FREE on certain days.  Well, we decided to go, and we took some other onions to check it out.  Silver Dollar City started out as a cave attraction and other things were added to occupy people while they waited for cave tours.  It's much like Knott's Berry Farm, but with several shows.  We went during "Southern Gospel."  So many gospel choirs, quartets, and such.  Of course, there were rides too!  Some pretty cool ones.  There were a lot of people there, but the shows were full and we walked right onto the rides.  The onions made several repeat visits.

Seth woke up to balloons and a Happy Birthday serenade.  The balloons mysteriously disappeared.  Hmm?

Seth taught the young men in our ward and in scouting how to do chain mail.  The missionaries joined in too. 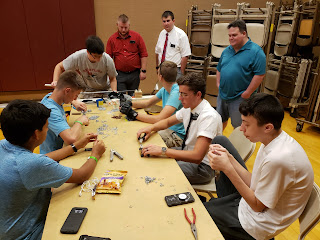 Seth said he wanted cheese balls for his birthday.  As if we weren't cheese ball enough already. wink wink.  We thought it would be fun for everybody to get him some, but the store only had three.  so other candy had too suffice. 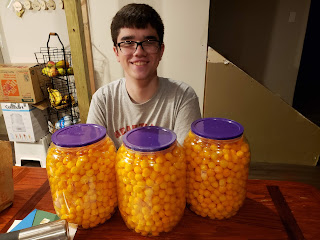 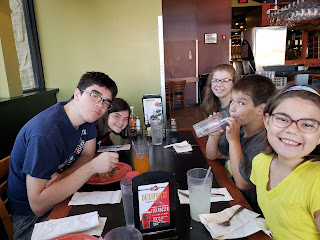 Several days later, Seth is still experimenting with all the ways he can eat his cheese balls.  Um? 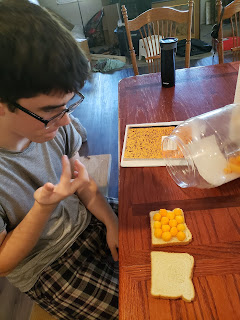 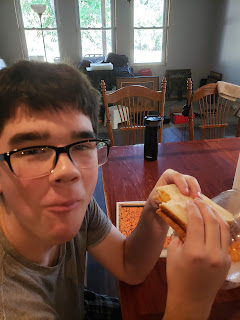 Seth is doing well.  He is working and saving as much as possible.  He begins trade school for horseshoeing in February.  Seth is looking for scholarships ans has applied to a few.  Finding scholarships has been a challenge.  "White male with parents that are not suffering financially."  First world problems people.
He's growing up and launching!
I admit that I have emphasized on life skills and independence to the point of beating the dead horse.  But I have questioned the possibility many times over.  I am so excited for and proud of my boy.
I have faith that the Lord will provide a way for Seth to go to school.


By BackToGeorgics - September 25, 2019 5 comments:
Email ThisBlogThis!Share to TwitterShare to FacebookShare to Pinterest

A Visit from Aunt Amy

Scott and I had agreed to care for the animals of friends from church while they were on vacation.  I miss having goats!  We want a pig and a LGD too. (Livestock guardian dog)

My sister Amy was traveling and decided to stop and visit with us.  It was nice to have her here on so many levels.  She lit a fire under just about all of us to clean up some stuff in and around our house.

We cooked and ate lots of new yummy recipes.

We relaxed a bit. 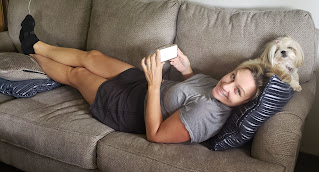 We also went to Bakersville.  The garden was flourishing.  Lunch was yummy too.

I got frustrated and overreacted when furniture was moved into the living room without felt pads.  We got felt and life is good again.  We got out pictures and artwork to hang.


I canned and dehydrated some tomatoes. They were grown in a church member's garden and offered to us.

I love the look of home canned food in my pantry!

Amelia and I found a couple of turtles along the dirt road to our house.

Amy took most of the pictures and I did not get them onto my album.  Bummer!

I am the Primary President (in charge of children 18 months - 11 years) in our ward (congregation).
I was invited to speak at our stake (usually a group of 7-11 wards) Primary Leadership training meeting.  I was also invited to introduce and teach a song.  Amy asked a few questions about it, so I invited her to come.  And she did.

I was a huge ball of nerves from the time I was asked until I spoke.  But I think it went well.   It was really nice to have her there with me.  She even sang the song I presented.  Despite singing off key, losing my place leading the music, and being intimidated by the very talented women in the room, the message was communicated and it was beautiful.

I am grateful to be able to serve my Heavenly Father by serving others, especially children.  I am blessed to have Amy in my life.