Prom, a birthday, and a variety show act

I am struggling to get back in the habit of writing weekly.  I plan to write on Sundays, and then Sunday ends up being my longest, busiest day of the week.  Thankfully, I can repent and try again.  Thanks for your patience with me.  Then I thought, Why write it in an email?  I stopped writing on my blog because my onions greatly resisted every time I tried to get a picture.  However, I am going to try again.
We are still trying to get all the gravel brought in that we need for our driveway.  The guy is a friend and brings it when he can.  It is slow going, but hopefully cheaper than hiring someone else.  Eric and I decided that we would fill in the compacted lull in the front of our house with gravel too.  I have had a couple of ideas about how to do the border to transition from grass to gravel.  The first was to intermingle discs of tree trunks in with the gravel. It looks neat, but it's not practical for me to get things level and have them stay level, and also be able to replace them as they rot.  The second was to cut smaller trees in 8" to 12" sections and bury them vertically, making a distinct border.  However, the edge includes some rather large trees.  Digging into the roots is nearly impossible and unwise.  So I decided to go back to my original idea of tree trunk discs, but use them as the border only.  And.....  we have one load of gravel that our wonderful neighbor spread and flattened for us. But we need at least one more load.  So things are on hold for now.
In the mean time, I cut down a rather large cedar tree.  Scott helped cut off many of the almost countless limbs.  Naomi helped drag them to the trailer and dump them at our burn pile.  I cut discs as we progressed. 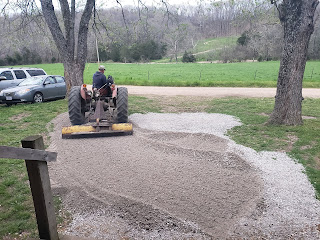 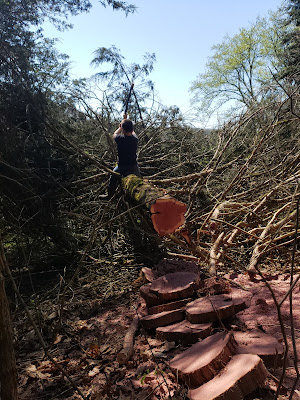 ​Amelia went to Church Prom.  All the girls were invited to one house to get ready.  It was hectic, but fun. Amelia went to Prom in a triple date group.  All "couples" went as friends.  Amelia had a WONDERFUL time.  She was smiling ear to ear when her date dropped her off.  We got to hear all about it for about 45 minutes.  But at midnight Eric and sent everyone still up off to bed.
They danced a bit in their group and noticed MANY people along the wall that did not come with a date.  They decided to dance with those who were not.  Amelia's date would point out a boy for her and she would point out a girl for him.  Fun stories there..... She made friends with a chicken guy and a car guy.  And managed to evade being asked for her number.  Then at the end of the dance, her group noticed a handful of adults cleaning up and realized all the effort that would take.  They stayed and helped.  They helped so much that they missed their reservation at the intended restaurant and ended up grabbing fast food on the way back in an effort to get everyone back by the agreed upon times. 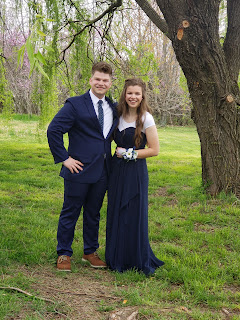 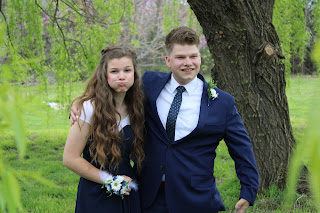 Amelia's date had his wisdom teeth pulled earlier in the week and his cheeks were super chubby.
She made him feel at ease by having chubby cheeks too.  Ok, not really, but it was funny. 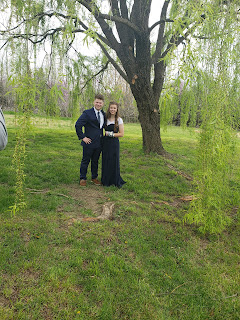 There are some really beautifully manicured places out here.
The home that we gathered at is one such place! 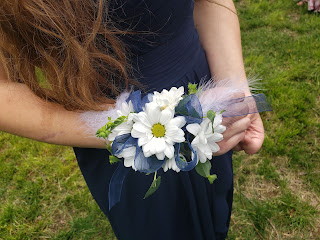 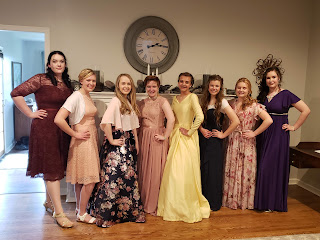 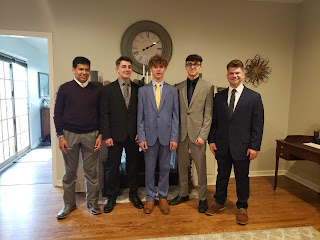 Amelia plays the organ for Sacrament meeting at church.  Eric and I have taken her to church to practice quite a bit.  Last week, Brother Veech, in the bishopric, called and asked if I would be home.  He brought an organ for Amelia!  Unfortunately, she was not home at that time.  But we got it in and set up and ready to surprise her.  She was speechless!  Now she can practice at home.  And because it has a headphone jack, she can practice at all hours of the day and night instead of having quiet time limits (before everyone is up and after people head to bed.) 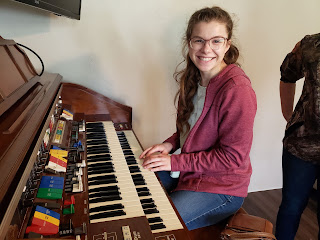 Seth is getting more business.  Although, it comes in waves.  More calls and more jobs!  I am hopeful he will be able to build his business.  He is "adulting" while living at home and we are all learning how to navigate that pretty well.
Second winter came and went.  The trees were all budded out and we got snow and 2 days of below freezing nights.  It was pretty, but I am concerned about planting fruit trees.  I really want to.  If I have fruit trees, I want fruit.  So I will have to figure out the latest blooming trees and get those.  I have almost completely cleared the hillside behind our garden space.  I need to get trees SOON!
I plan to till the garden area this week to be ready for warm weather planting.  Many people plant early, but Mothers day weekend is safest to avoid any frost. 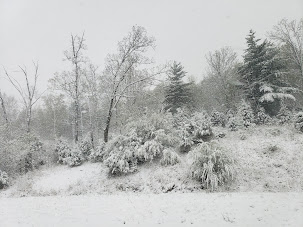 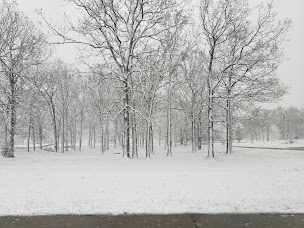 Elanor had an orthodontist appointment on the day it snowed.  The whole reason she got braces was to address one tooth in her mouth that was growing backwards rather than up.  We had the baby teeth removed.  It did not surface.  So we were sent to an oral surgeon.  The paperwork was a little different than I expected.  The orthodontist said he wanted a chain to be attached to the tooth to be pulled up into place, and to take a look at the wisdom teeth.  The oral surgeon staff was adamant that the orthodontist said to extract the wisdom teeth and take a look at the other tooth to see if they could put a chain on it or just extract it.  The oral surgeon decided that he could not save the tooth, so extraction it was.  The orthodontist didn't seem to be bothered when he next saw Elanor.  So I went in to ask about it this last time.  Well I jumped on the hamster wheel.  The oral surgeon blamed the paperwork and the orthodontist seemed very surprised and blamed the oral surgeon.  In any event, I trusted what the doctors told me and the tooth was yanked and there is no going back.  So I paid for braces on a mouth that was not bad at all to start with, then for multiple tooth extractions, and she will get a spacer and will need an implant.  I am SO frustrated with the whole situation.  Especially because I asked the orthodontist before we signed up for braces if we could just yank the tooth and move on.  I wanted Elanor to have the best possible outcome and chose braces.  She will certainly end up with a perfectly beautiful smile.  However, I feel manipulated and taken advantage of.
Naomi and Scott bought a water rocket.  Super fun!  It has the potential to go about 150 feet in the air.  I think they got it to about 120. 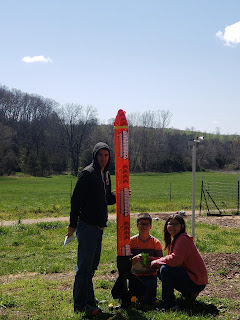 You can watch the 13 second video. Click here.
Naomi has had a difficult time in her Wednesday church activity group.  It is for girls ages 7 to 11.  She is the only 11 year old and is rather mature for her age.  Her friends are 2 years older and in the youth program.  Last year was a tough year without her best friend, but this year has been almost unbearable.  Naomi missed the cutoff by 5 days.
The next oldest girl in Naomi's group is over a year and a half younger.  There are 3 girls that come regularly and their families are very close.  They don't intend to hurt Naomi's feelings, but their desire to be with each other excludes Naomi.
Naomi has cried herself to sleep more often than not on Wednesday nights because of the exclusion and rejection, combined with the longing to be with her friends.  Our  Young Women's president (and our bishop) recently invited Naomi to join the youth program.  She very quietly and uneventfully left Primary and is now attending classes and activities with the teens.  She will not be able to go to the temple until next year and she does not get to go to the stake girls camp, but she accepted the exceptions happily.
Eric and I have noticed a dramatic difference in Naomi.  She is generally happier, more eager to help - often seeing a need and filling it without being asked, less provoked to anger, smiles a LOT more, and best of all no crying.  We asked her about it.  She said she had been making an effort to get more sleep.  This happened around the time she entered the youth program.  The combination of sleep and changing programs has been wonderful for her. 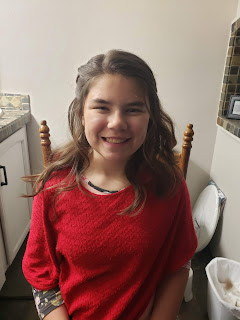 ​Scott is now officially a teenager!  The big ONE THREE!
Scott and Naomi play soccer and they were supposed to have a tournament on his birthday, but it got rained out.  We didn't DO much for his birthday but we had a nice day.  He originally decided to go to a local diner, but then we got to talking and reminiscing about ​birthdays past.  The first birthday in Missouri came up.  We all really enjoyed that restaurant.  We looked it up and realized it was the same restaurant the Prom group was going to go to.  Scott decided he wanted to go to that restaurant.  We arrived to learn that the local high school was having prom that night.  We didn't wait too long, but the restaurant was extremely busy and slightly understaffed.
We returned home for cake.  Scott asked for chocolate cake.  I made it, and the frosting too.  The cake was quite rounded and I tried to fill in the gaps with frosting.  Scott decided he liked it without frosting on top.  Not quite backwards, but definitely unique! 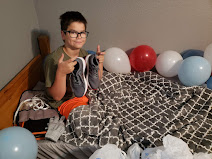 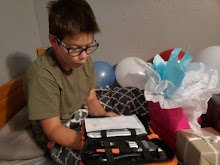 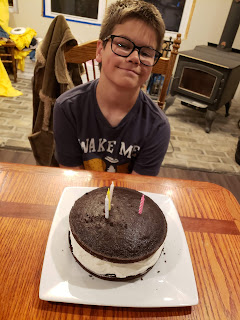 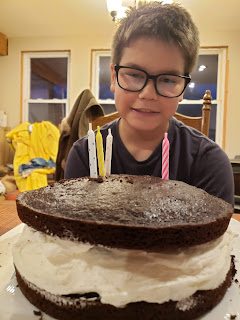 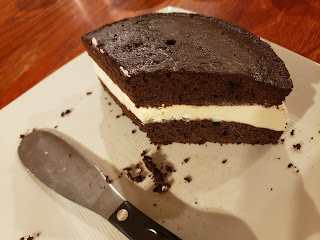 Yesterday was my last official day as Primary music leader, at church.
In October, we tried singing time with requiring masks to sing and humming if not wearing a mask.  It did not work.  Then, in January, we cut singing time and had only class time.  Three weeks ago, we returned to regular Primary: with no mask requirement, music time, class time, changing classes, and nursery.
I had the BEST day leading music on Sunday!  I cannot carry a tune, I sing off key, I am a total hot mess, and we have no pianist to help keep me on track.
However, I am confident in my ability to TEACH!
I texted one particular mom, telling her how much I enjoy her boys in Primary.  She informed me that her 3 year old was (at that very moment) dancing around, singing the words to one of the songs I had taught in church.  It melts my heart that I get to play a part in gospel instruction of the children in our ward (congregation).
And a MUST WATCH....  The youth had a "variety show."  This was the Larsen's act!
You can watch the 4 minute video. Click here.
By BackToGeorgics - April 27, 2021 1 comment:
Email ThisBlogThis!Share to TwitterShare to FacebookShare to Pinterest
Newer Posts Older Posts Home
Subscribe to: Posts (Atom)