I made a list of almost every RV park along our route.  My routine is to call and call till I get a spot.  Wednesday (6.13.18) was not a good day.  I called a few places: "All full", or "we only have monthly rates."  Our original plan was to stay close to Eric's Uncle Craig and Aunt Colleen.  The closest spot I could find was over an hour west, west of Fort Worth.  That made for a relatively short drive, but not nearly as close to family as I had hoped.

RV DRAMA:
I called.  They had room for us, late checkout, and even a pool.
We arrive.
I go in to register.
lady: Uh what year is your RV?
me: 2001
lady: we have a rule that the RV can only be 10 years old or less
me: stupified
lady: let's just put 2008
enters owner (an older man)
owner: what year is that RV?
me: today it's a 2008 (smiling)
owner: what was it yesterday?
me: (hesitantly) 2001
owner: contemplating.....
lady: how many?
me: 7 plus a little Brussels Griffon dog
lady and owners and assistant's eyes ALL about pop out of their head!
owner: what!?  how old are they? can you hide one?
me: 15, 13, 12, 10, 8
eye popping responses
owner: ma'am, I can't let you stay here
me: (already nervous that they wanted to turn me down because of our RV)
I have called several places already.  I was not informed of these requirements or asked any questions when I called in.
owner: didn't you go to our website?
me: no, I called
(thinking - why on earth would I waste my time researching every single RV park just to be turned down when I call.  I just call!)
owner: ma'am I cannot let you stay here
me: I have called so many places and all have been no's because they are full or only do monthly rates.  Where do you suggest I go.  I am having a hard time with this because I thought I had found a place, finally. (pulling the emotional cry card at this moment)
owner: how long are you staying?
me: 2 days. My husband works and I will be gone with the kids during the day. (a little desperation in my voice)
owner: where do you have her staying?  They look at the map.
.........
.........
well all right, but just this once.

The assistant gets me a free Good Sams club card.  They give me all the discounts they can.  And send me on my way.  Deep breath of relief.  What an ordeal.

I resolved not to offer our information, but I plan to ask if there are any more requirements or qualifying questions. 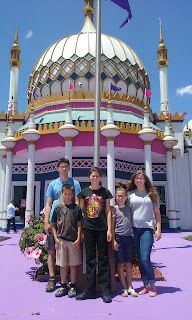 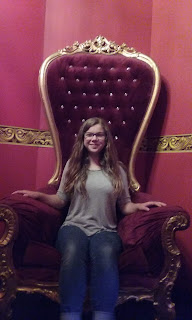 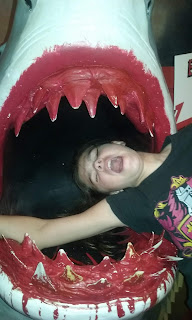 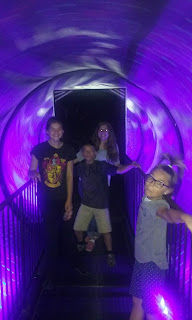 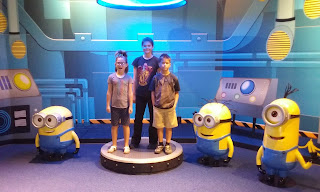 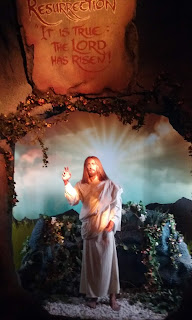 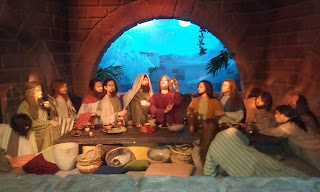 We had lot's of fun in the mirror maze, the wax museum, and the odditorium.  The laser race was lame and I didn't dare 7D moving theater.  I got nauseous just thinking about it.  Those who went liked it.
The thing that struck me most was there was an entire section of the wax museum dedicated to the life of Christ.  It was really neat.

Friday (6.15.18) morning, we headed to the Dallas temple.  Amelia and Elanor really wanted to go and this was Elanor's first time going to the temple to perform the ordinance of baptisms for the dead.
I dropped them off and they got to see Aunt Colleen.  She and Uncle Craig volunteer there every Friday morning. 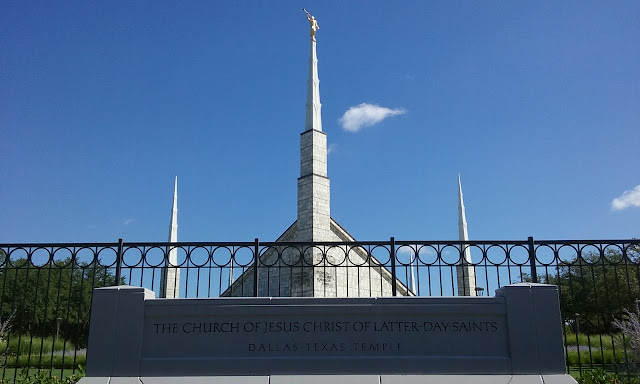 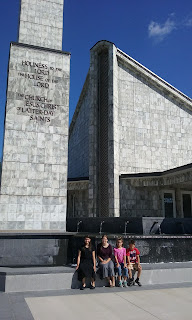 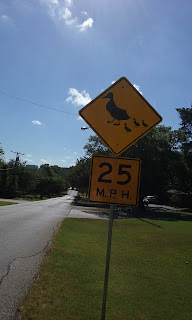 The duck crossing sign was on the same street as the temple.  We didn't see any ducks crossing though.

While the girls were at the temple, I found a Harbor Freight store to buy a double hitch and some external lights for the car.  I received a call from Amelia that they were done while driving back.  Perfect timing.
From the temple, we went to an aquarium.  It was fun for everyone. 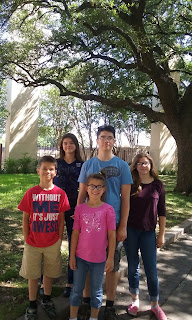 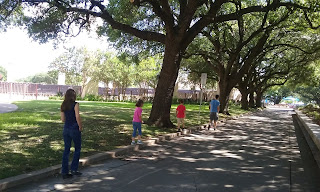 The walk was beautiful but hot.  Although not much different than our car.  The AC went out.  ARRGGHH 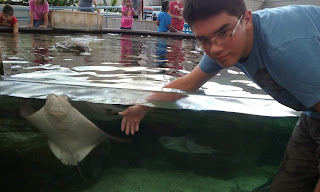 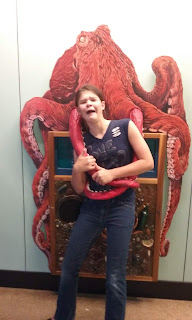 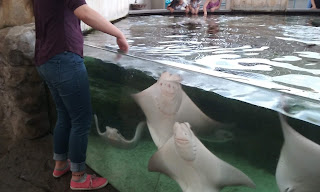 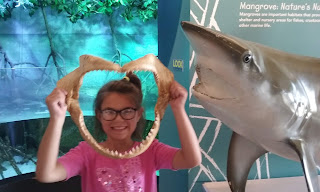 After the aquarium, we went to Uncle Craig and Aunt Colleen's.  They live in a really nice retirement community with every amenity you can think of. 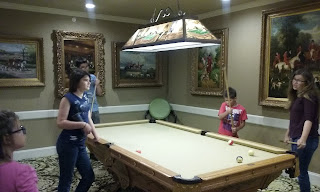 We learned how to play pool.  I am not very good. I wasn't any good the last time I played about 20 years ago.  But the onions were impressed with me.  What a nice perspective they had.  And of course, I pointed out that this game is all about real life application of math and science.  There was a table shuffleboard game too.

Eric joined us. and we learned of his adventures coming to meet us, driving the RV on his own.

ERIC'S RV DRAMA
Eric disconnected and left the RV park.
He got on the freeway and the plastic casing for the drivers side rear view mirror fell off and was flapping against the RV.
NOTE: it takes a lot of focus to operate large vehicles.
There is no place to pull off.  No emergency parking lane, just a narrow edge and the a grass embankment that is anything but level or safe.
Eric rolls down his window and attempts to hold the plastic on. Yes, while continuing to drive, on the freeway!
Soon he approaches the interchange where he needs to get onto a different freeway.
He sees that there is space in the triangle between the two freeways as they split.
He pulls into the triangle with cars rushing by on both sides, cars intermittently honking.
Eric has NO idea what to do.
At this point a big rig pulls up behind the RV.
Eric thought he might offer assistance.
The other driver does not get out.
An awkward 2 minutes passes and the big rig pulls away.
Eric says a prayer and gets out there to check it out.
The mirror itself is sturdy and intact.  It's just the plastic around it that is the problem.
Eric thinks zip ties.
OK.
He gets his tool bag from an outside lower compartment.
NO zip ties.
Sigh.
But he looks around.
There is wire from when we did the fencing on our mini farm 3 years ago.
I am thinking : How is that still in there?!
It will work.
Eric wires the plastic to the mirror.
It looks and feels good enough and off he goes.
It's been just fine fine ever since and the annoying loose rattle we have heard from time to time since we bought the RV is now gone.  Win! 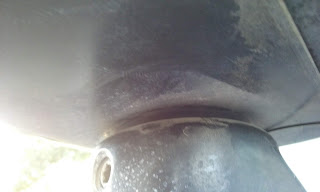 Eric wrapped wire around the base 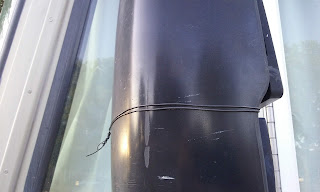 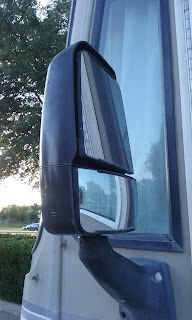 It's barely noticeable from even a short distance.

Hanging out with Uncle Craig and Aunt Colleen was nice.
Amelia and Elanor got the clothes that were left in Kenny and Mary's dryer.
Eric was able to work a little more after his driving adventures.
Then we headed to dinner to see David, Heather, and their son. 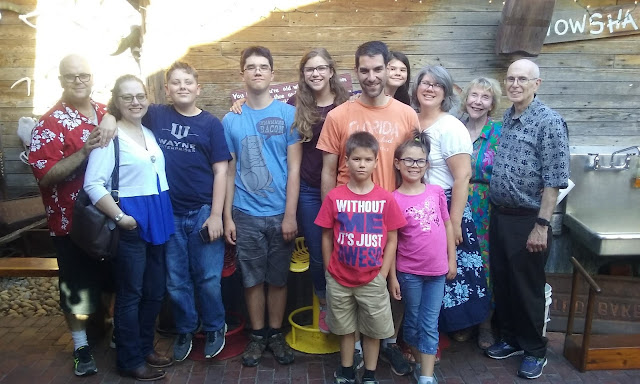 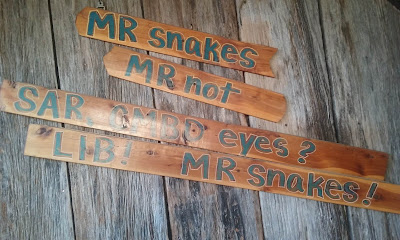 Many of these signs are all around the restaurant.

It was a full day and time to get going.  We said our good byes and returned to the RV which was parked in a department store parking lot. 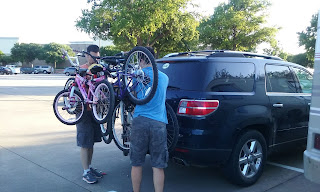 The original set up was to have the bikes on the back of the car.  But they blocked the lights.  And the lights on the car have not been working.  That's an issue were decided to circumvent and deal with later.  Eric saw a handy set up, so we thought we would try it. 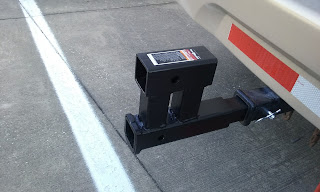 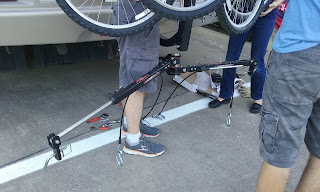 Well, it was great in theory, but not in practice.  The wires were too short for the car.  So after taking off the bikes and transferring them to the double hitch, we took them off again and put them back on the car.  However, Eric put lights on the top of the car so that the lights would actually work and could be seen.  What a long process of trial and error right there. 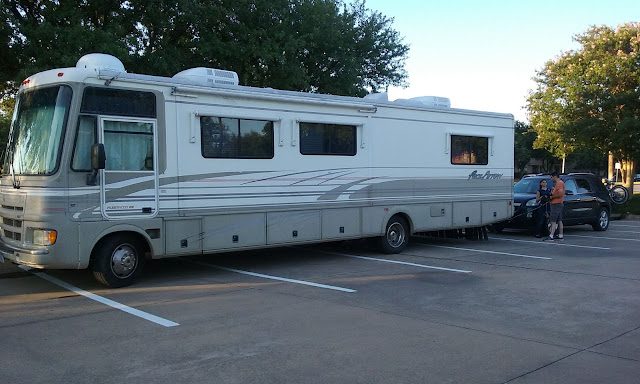 We were exhausted and on top of that, I decided that we could dry camp at a rest stop.  The rest stop was FULL.  So I found a large parking lot and we headed for that.  As we were exiting the freeway, there was an even larger parking lot - a hospital.  So we stayed there. 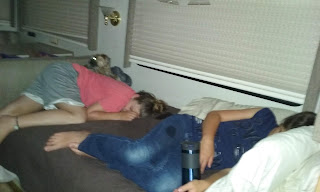 Wiped out and a disaster.  We slept where ever we fell.

By BackToGeorgics - June 16, 2018
Email ThisBlogThis!Share to TwitterShare to FacebookShare to Pinterest