Our last week in Utah

Monday was soap making day.  Amelia decided to make soap to sell at the Georgics fair this coming Saturday.  I helped her, but she did most of the work.  Well, until we noticed the second batch of soap turning into jelly.  Amelia looked up possible explanations and discovered that adding certain things, like fruit, can raise the temperature of the reaction and "volcano."  We emptied the molds back into the pot we use for making soap.  I stirred until both arms were sore.  The soap cooled and returned to a saponified looking soapy consistency, but it was super thick.  We returned the soap to the molds and we will see how it turns out.  Although Amelia has helped me make soap in the past, I don't think she realized just how much work it is.

The other 3 soaps looked good, but we left them outside to cure and one got too hot and "melted" a bit.  Argh.  I felt really bad for Amelia.  It was our favorite - peppermint lavender with lavender buds.  I am excited to try it myself though.
The thick soap survived and smells wonderful when used!

Monday night was dinner at the Kotters.  We have been friends for over a decade.  We just love them!
Dinner was great.  After dinner it was decided that we would play songs from the Greatest Showman movie.  Angela played the piano along with the music.  Her kiddos sang with gusto.  My kiddos joined in along with Doug.  Eric and I sat back and soaked it all in.  It was super fun to hang out with them and experience their musicality. 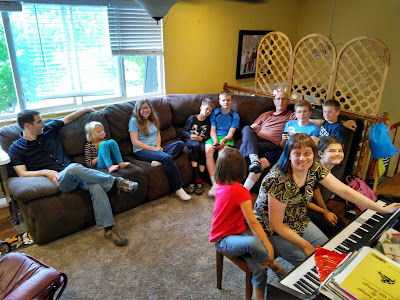 Eric and I made a list of things we needed to accomplish before we left.  I got right to work and enlisted the onions.

The onions and I reorganized the compartments under the RV.   Everything was haphazardly shoved in hastily to get us out of Nana's house.  I think we will be able to find things a little easier now.  At least I will.  I know where everything is.
We cleared out all of our things from Steven and Nancy's garage and put them in the RV or designated them to storage.

I was not very kind in this process.  I wanted it done my way!  The onions were actually all content enough to help to begin with.  But then I ruined it by being critical and drill sargent - esque.  I hate it when I choose the task over relationships with my children, yet that is my tendency.  I am learning to recognize it sooner and change my behavior faster and apologize quicker though.  I get frustrated with myself.  Thankfully my kiddos forgave me and everything has a place whether I put it there or directly supervised, or someone else did packed it and made it work.

The commonwealth we went to last year borrowed our carport for their Shakespeare play.  They brought that to us and we added it and a few other items to our storage unit.  I am amazed.  It's pretty full, but we still have a little bit of room. 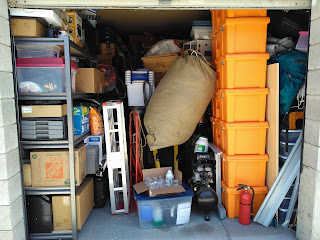 Throughout the process of our final packing, we accumulated more and more trash - too much to go to a local park or random public trash can.  We would have filled a couple of cans.  So.....  I decided to go to the dump.  But the truck was no where close to full.  I remembered a home school friend saying they had some things to go to the dump, so we went to their place and picked up some large garbage items and off we went.  Win -win!  I helped out a friend and I felt like I got my money's worth.

I had the tires checked to make sure everything was in good order that way on our RV.

By Wednesday, I was ready to go.

I made some deodorant for Nancy and a few for us with Elanor's help.

Then I decided to try a 4th recipe of toothpaste.  After 3 epic fails and much money spent for the supplies, I was hesitant about the fourth recipe.  However I was drawn to it and it proved to be worth  my while.  I love home made toothpaste!  Well, it's really mouth paste because it's good for your whole mouth, not just your teeth - per the originator of the mouth paste.  I hope to never use store bought again.

Amelia decided she liked the mouth paste enough to make it for her georgics fair.  She made several batches, requiring 3 trips to two different stores.  I must say I was less than enthusiastic to make the 30 minute drive (each way) for 2nd round of containers and then the run for supplies we ran out of just a couple of hours before the actual georgics fair.  It turned out to be worth the effort.  She sold every single container (I was mistaken).

We primarily visited with friends on Thursday and Friday.  It was bittersweet, but more sweet.

Saturday was Market Day/ Georgics Fair and the end for the year awards night.  We had a wonderful time visiting,  and buying.
The biggest surprise was that Brent and Misty came out from Tooele to see us while at the georgics fair.  We had not been able to get together before hand.  I was so touched.  I got to physically be with them and hug them and say good bye in person. I am so sad I didn't think to get a picture.

Our good friends, the Warehimes, came too.  I was glad to see them and say good bye as well. 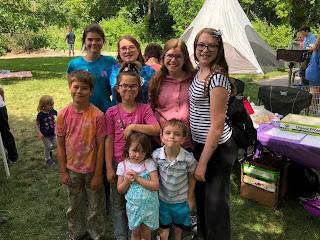 Amelia had a price structure that she worked really well -
one for $3
two for $5
five for $10
Only two people purchased one item, everyone else bought 2 or more.

Seth sold chain mail earrings and bracelets.  There was not much business at first.  Then I saw him in his chain mail vest.  There were many more people drawn to that.

I was so impressed with Seth and Amelia and the strategies they used to market the products they brought to sell.  Both were satisfied with their experience.  I am proud of them.

At the awards ceremony, I had the opportunity to give the boys in my class a gift.  I chose safety glasses.  And I made a little case for each of them out of science - y fabric.  I received several hugs and it was touching for me. 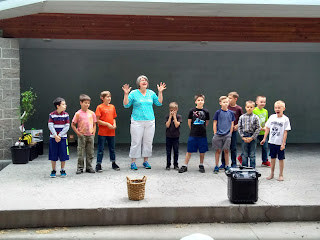 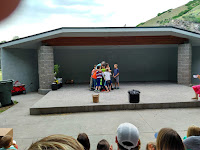 Naomi received a bookmark from her mentor.  Scott received safety goggles. Elanor earned a bow and arrow set in her class.  In Georgics, the scholars were given the opportunity to choose their awards.  Seth earned a hatchet.  Amelia earned a mortar and pestle and an analogue kitchen scale. 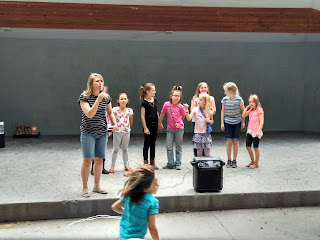 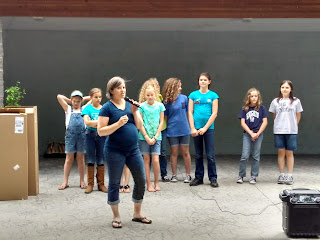 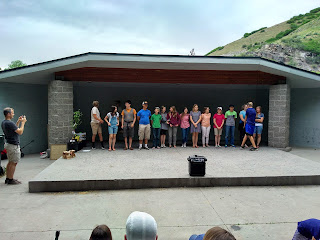 Saying good bye was more difficult than I had anticipated for myself.
Amelia and Naomi had a particularly tough time with lots of hugs and tears.


Saying good bye to family was hard.  I take comfort in knowing that they are bound to me by blood or by marriage.


By BackToGeorgics - May 29, 2018
Email ThisBlogThis!Share to TwitterShare to FacebookShare to Pinterest