Embarking on our Adventure

We attended church with Steven and Nancy Sunday morning.
Michael (our niece Megan's husband) spoke.  I felt the Spirit so strongly.  His talk was about Joseph Smith's first vision and gaining our own testimonies of the gospel.  It was wonderful.

We said our good byes, with many tears, and returned to the RV.  Everyone changed out of church clothes.  Eric had the tow hitch ready for the car and we attached it.  The light relay to the car didn't work!  We left anyway.

Our trip was rather uneventful other than the typical "howw muuuuch loooongerrr?"  Despite providing an arrival time, the question was asked more often than I cared to answer.
We traveled from Mapleton UT to Durango CO, 349 miles from driveway to driveway.  We made better time than I had anticipated.

You can see the map here.  It suggests 5 hours 45 minutes.  I estimated 8 hours on the long end.  It actually took just under 7 hours.

During our last 10 minutes of the drive, between Durango city and the cabin, a truck decided to pass us on a blind curve of the rather curvy mountainous road.  There was a vehicle pulling a trailer coming the other direction on the two lane road.  Eric hit the breaks.  I'm sure the oncoming vehicle did too.  The truck very narrowly made it back into the lane.  Eric and I held our breath.  My heart skipped a few beats.  If there was a collision, we were feet from it and would not have been able to avoid it.
Deep breath.
We made it and we don't need to dwell on what ifs.
There is a reason there are "no pass" areas on roads!
Is impatience really worth your life or someone else's?

We went to dinner at my brother, Denver's home.  Denver and his wife Erin were gracious to host us for the evening upon learning that we were coming at the last minute.  He even made elk burgers for me and dessert for everyone too.  Amanda and her family, and Hollee were there.  We all enjoyed our visit. 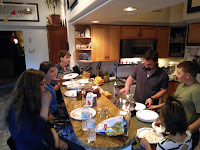 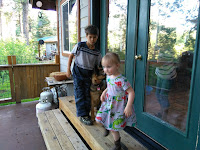 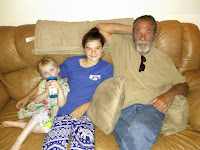 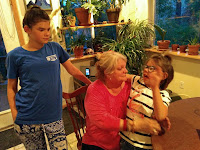 On our way home, we stopped by my dad's liquor store.  This was our first time to see it.  Wow, it's beautiful!  Inside and out.

Grossness warning:  I got sick.
I have not eaten much meat in the last few months.  I ate chicken salad the night before and then 3 elk patties less than 24 hours later.  I think my stomach was a bit overwhelmed.  I tried to vomit. My stomach tried.  I made all the motions and sounds.  Only a little would come up.  More than a "verp" where you burp and just a little comes up with it and before you realize what is was, you already swallowed it.  But it was certainly not enough to empty my stomach.  It was enough to go up my nose and burn and enough for me to need to blow my nose to clear it and to spit "stuff" out a few times.  Yuck!  Sleep made it all better.  I was fine the next morning.

We had breakfast and headed out Monday morning.  We all have dogs and they were getting along and sniffing and doing what dogs do.  I was doing some dishes I didn't want rattling in the sink on our drive and talking with everyone in the great room.  Then all of the sudden Hollee's German Shepard, Charlie, had our little Brussels Griffon dog, Piglet, in her mouth and shaking him like a chew toy.  Hollee was right there and got them separated immediately.

I surprised myself.  I calmly asked if there was any blood.  At the same time, Hollee was slightly freaking out, feeling bad.  But Amelia was most upset and concerned.  Crying, screeching. tears, the whole works, almost hyperventilating.  I continued washing the dishes and asked for someone to put Piglet into the RV.  And off he went.  I was cool as a cucumber.

A few minutes later, when Eric opened the door to the RV, Piglet shot out and headed straight for the German Shepard.  Well, you can guess who won that fight.  Charlie clamped down on Piglet right across the body gripping just behind the front legs on one side and the neck on the other side.  Thankfully, Scott and my nephew, Adam, were with Charlie when Piglet went after her and they were able to get the dogs separated quickly.  This time, Piglet was not so fortunate.  The skin was broken in a couple of places and he was indeed hurt, covered in slobber and super stinky.  I gave him a quick bath because I was not going to suffer the scent gland stench during our drive.  And thanks to a very good friend teaching me, I knew how to empty the glands and wash it away.
That was enough drama for one day and we hadn't even gotten on the road yet.

We traveled from Durango CO to Roswell NM, where Eric's cousin, Steven Michael, lives.  We missed a turn to stay on the 550 and continued to Farmington, NM.  We were able to get gas though, so it wasn't a complete waste.  After that, I was more careful about my co-piloting duties.

You can look at the map to see our path.  We drove 437 miles driveway to driveway   The map suggests 7 hours 1 minute.  Our actual travel time was just over 8 hours.

We had one tense moment when a truck pulling a trailer was in front of us and turned off the road.  The turning wasn't the problem, it was the coming to almost a complete stop in doing so.  Eric had to hit the breaks.  Naomi had just started eating cereal.  For lunch.  We had Eggs, hash browns and bacon for breakfast.  This is how we roll in the RV, eating in motion.  I thought it was the easy button.   The bowl slid and spilled all over Naomi, the bench she was on, into Elanor's shoes under the table, and all over the floor.
Eric began looking for a place to pull over.  I began wiping up the mess. Naomi got up to change her clothes cause her entire woredrobe was 10 feet away.
I cleaned up and Naomi changed.  But we never pulled over.  I was extremely nauseous and sat down without talking or moving much for a while.  I was more grateful for the inability to puke than to be able to get it out that time.  I did not want another mess to deal with.

New Mexico is a new state for us.

While Eric was working we decided to check out the sights.  Aliens.... 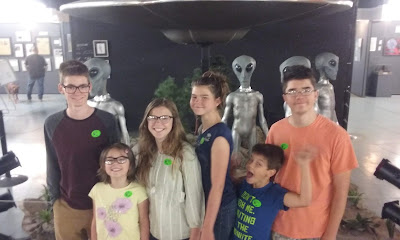 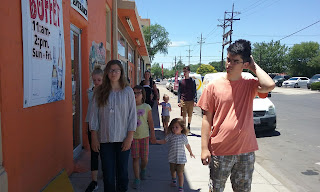 We were in a gift shop and 3 different onions at 3 separate times suggested that we get Eric a real tin foil hat.  So fitting! 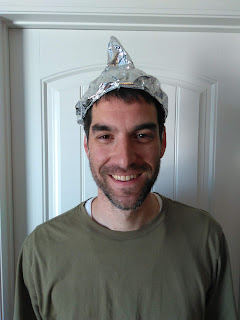 We went out to dinner Tuesday night.  We fit perfectly in one of the banquet rooms.  The food was delicious and the price was so low we asked if it was right (Nice right? When do you go to a restaurant and think they missed charging a meal or two because the bill is seemingly too low? Me - never.  Well, till this happened).  Visiting was the best part though. 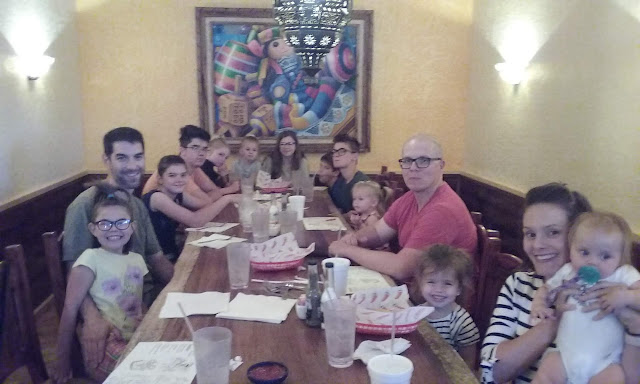 I was talking to a dear friend just a few days before we left Utah.  When she heard that out travels included Roswell she suggested Carlsbad Caverns.  Awesome, we will go.  However, it is 100+ miles from Roswell.  I came up with 3 options.
1. Day trip while Eric is working.
2. Carlsbad, then Las Cruces
3. Las Cruces, then Carlsbad.

We decided to leave Roswell a day earlier than our original plan.  Our path has changed just a bit from this to this.


Wednesday in Roswell.  We went to the "Bottomless Lake."  It's like the local reservoir in Springville.  Pavilions, sand, and really cold water.  This was bigger though.
We got to bring along the two older cousins.  I think it was a good time had by all.  I got to read and only intermittently look up to take a head count. 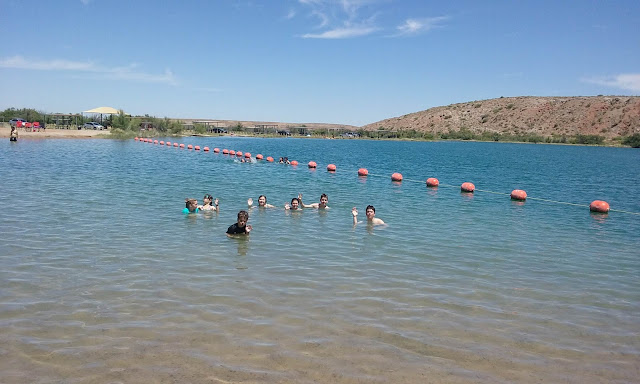 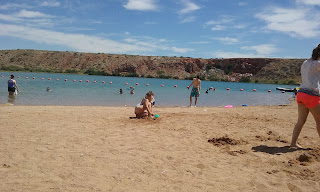 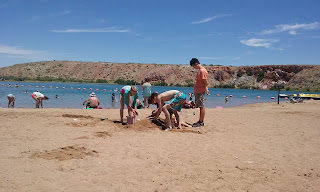 We got back a little later than I had anticipated.  Then I went to a grocery store for a few things.  Eric was done with work and we loaded up the bikes and got the RV ready to go.

We said our good byes.  It was suggested that we could just live there.  I felt so loved!  Even if it was said because they love their cousins.

We loaded up and headed to Las Cruces.
We saw much of the same desert scene for a good portion of the ride. 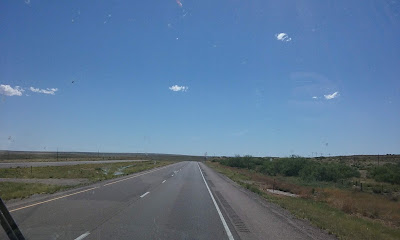 The we came to a beautiful valley and trees abounded.  Then came a mountainous forested region.  It reminded me of Flagstaff Arizona.  We did not expect to drive through elevations of 7500+ feet. 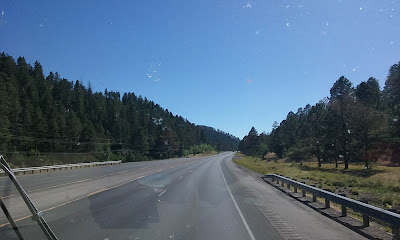 We will be in Las Cruces for almost 2 weeks.  Then we will travel east, visiting Carlsbad Caverns. And to Dallas by Father's day weekend.  Then we will begin looking for our home!

By BackToGeorgics - May 31, 2018
Email ThisBlogThis!Share to TwitterShare to FacebookShare to Pinterest