Last week, we decided to get rid of the island and one of the cabinets in the kitchen......

The island:  The top and work space came off easily - they weren't attached.  The frame came off relatively easily.  But the boards beneath were glued down pretty good.  Crowbar!  It took several hours of the onions taking turns scraping off the glue.

Elanor took off all the cabinet doors in preparation for refinishing.  Then we noticed some things.

The sink cabinet:  (We knew it needed some repairs.)  We discovered that the counter top was not flush with the wall.  Water that gets behind the sink flows down behind the cabinet and onto the bottom.  Super moist.  It's precarious.  However, it's still standing and in place.

I had originally planned to refinish the cabinets.  Nope.  (Part of the counter top is veneer over press board, so no sanding and restaining.)  Now the plan is to clean them up and replace the kitchen when the mortgage is paid off.
Fix it up,
wear it out,
make it do,
or do without.

Naomi helped finish cleaning out the space under the stairs.
Everything seems to be harder than it looks.

The vlog idea is a little more complicated than I thought it would be.  I doubt you want to get to know us by the look of our back sides.....  Here are some videos of our day, mostly in the kitchen. 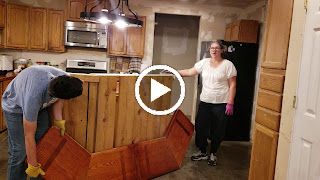 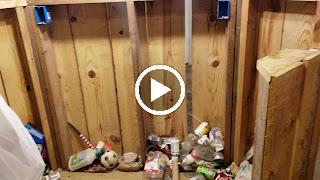 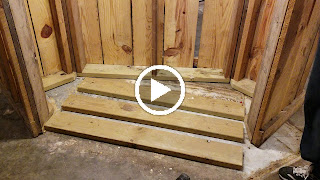 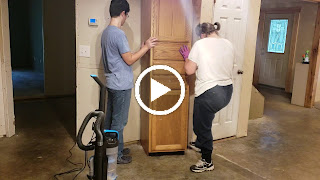 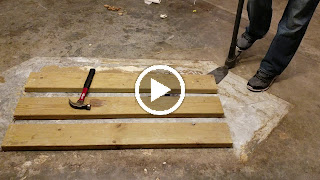 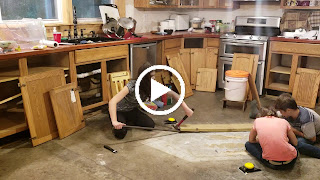 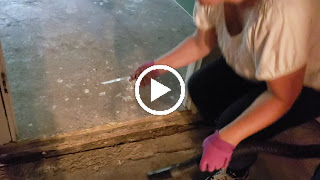 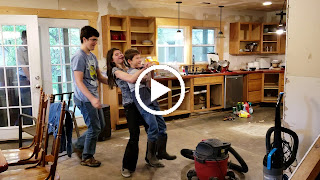 
By BackToGeorgics - September 07, 2018
Email ThisBlogThis!Share to TwitterShare to FacebookShare to Pinterest