Moving out of Nana's

Monday morning was moving into the RV day. I put the things that I wanted to take on the table. Elanor and Amelia practically begged to organize the kitchen and food. Well…. Ok. Everyone helped take the things to the RV and it was all loaded up. Magic! 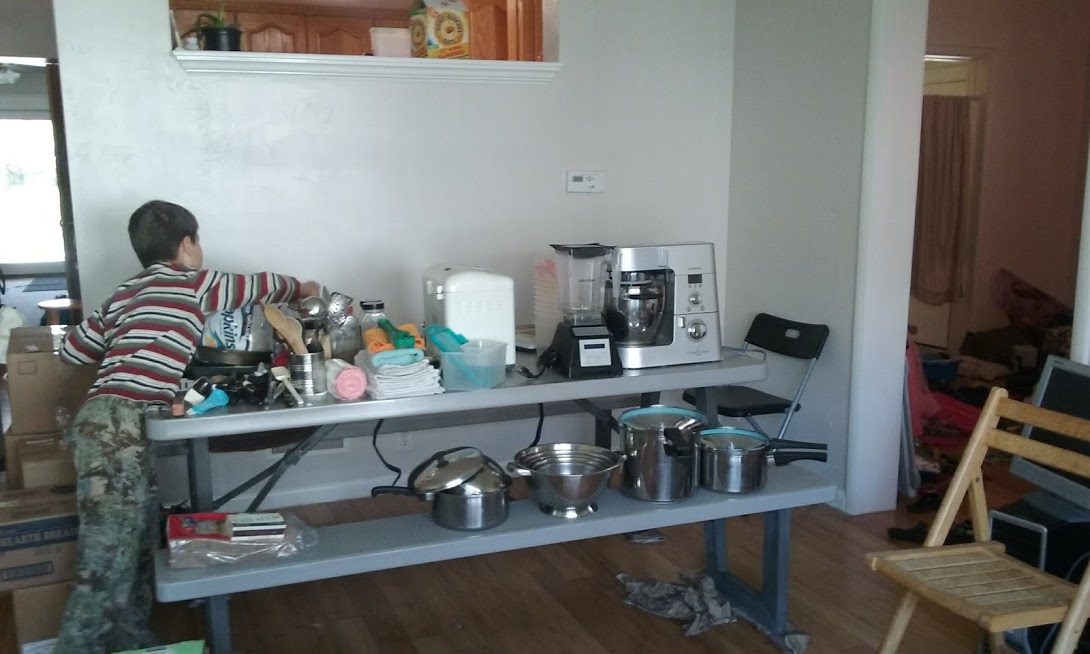 I spent the day boxing things up and trying to get them out. So many piles to keep straight - the RV pile, the storage unit pile, the donation pile, the trash pile.

I was also selling things that had not sold in the yard sale. 1000+ pounds of old wheat, water barrels, a filing cabinet, Eric’s car, and other random items.

We woke him up by flooding his cubby with balloons and singing to him.  You can watch it here.

I managed to make a cheesecake for him on Sunday. We ate half at breakfast! 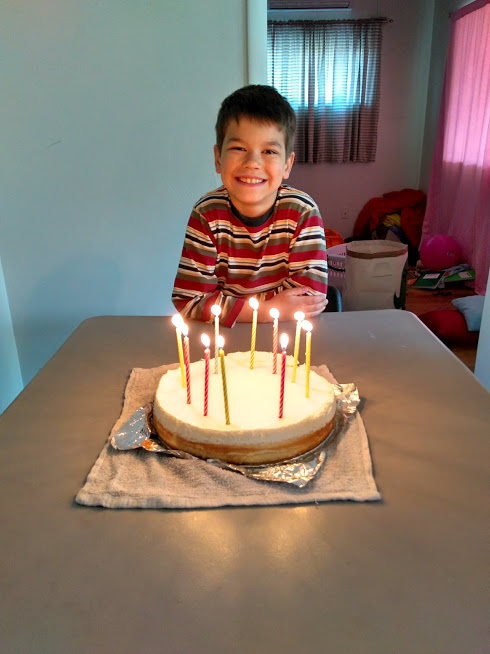 Scott made it clear that he did want to work on his birthday. I tried very hard to make that happen. Ultimately, Eric and I took a load to the storage unit and told the onions that helping was optional. We also had some donations to drop off and a then a box to go to uncle Steven and aunt Nancy. Everyone decided to go along for the ride. Scott’s birthday gift had arrived! I tried to cover and say the box contained the books I had ordered, but the labeling on the box was telling. Dominoes! 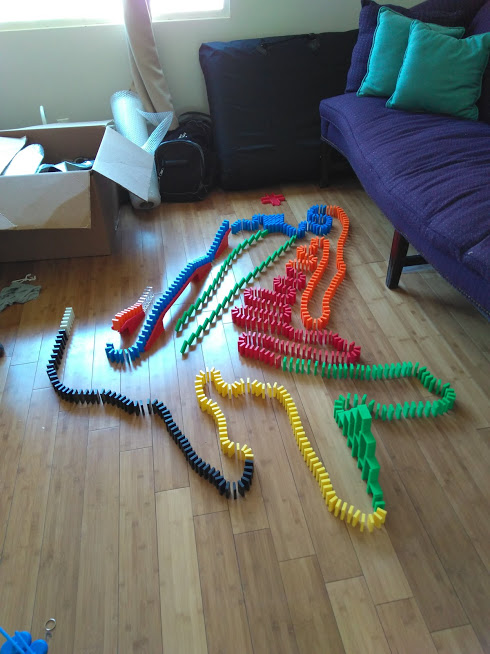 We went to two parks, out to dinner, and more cheesecake for dessert. 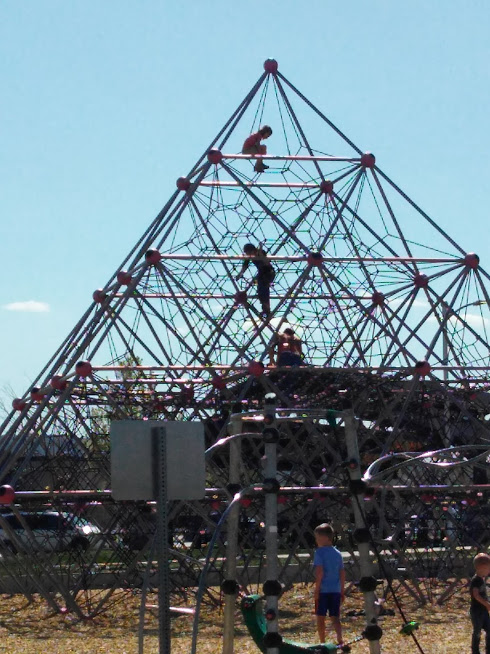 The shadow nearest the top is Scott, 3 stories high. 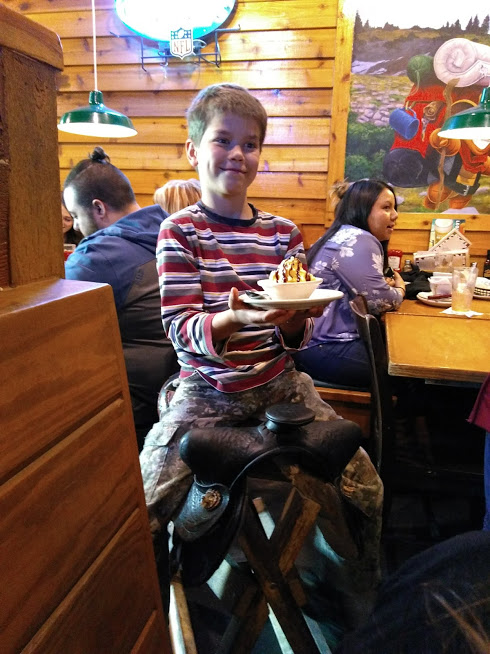 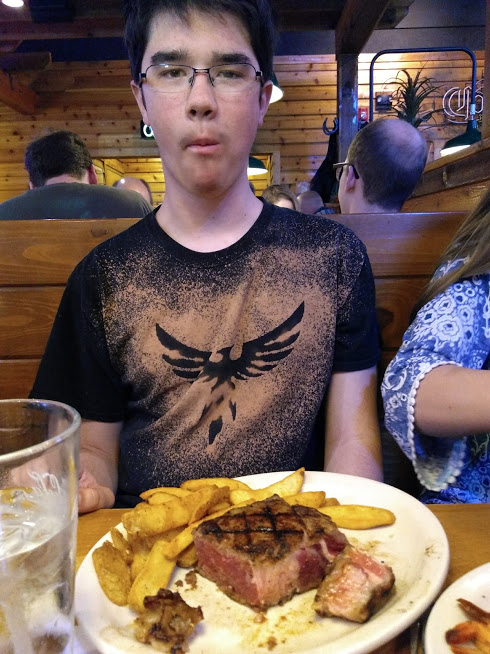 Elanor has been quite industrious. She proposed starting a concession stand. She listed possible items to sell, priced them out, narrowed her list, purchased the items herself and set up shop. She originally started with an old wheelchair left at Nana’s. But we upon driving over, we immediately observed that it was misleading for passers by. Elanor purchased a kid carrier attachment for a bike. She shoved all her things into it and called it good for a while. Now that we are moving, she decided to make it her own and has changed somethings around to suit her concession stand needs better. 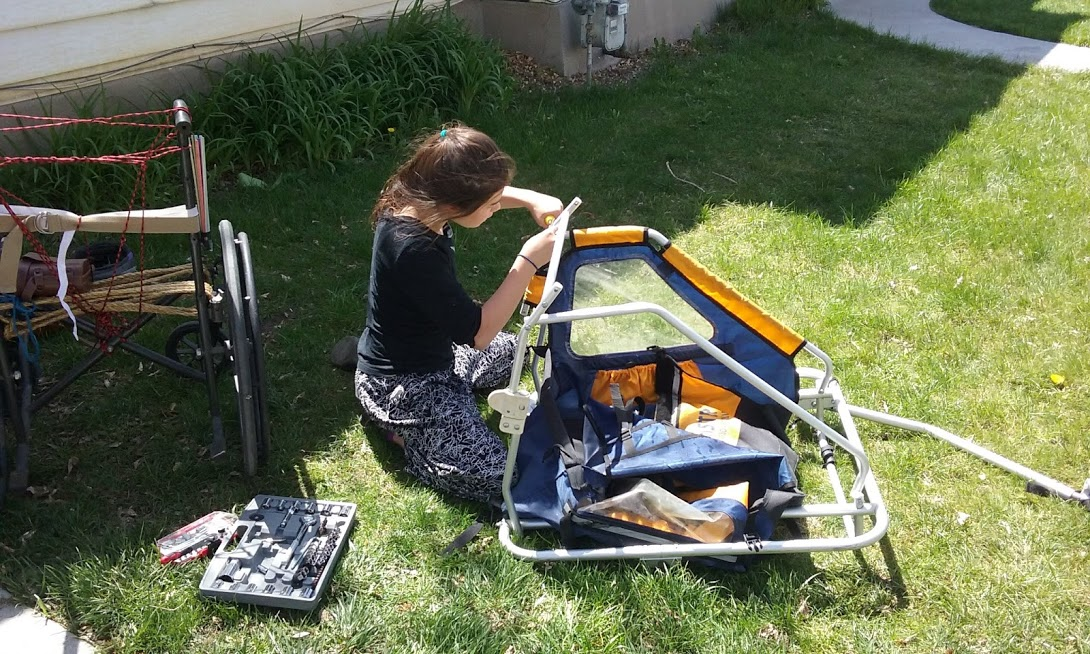 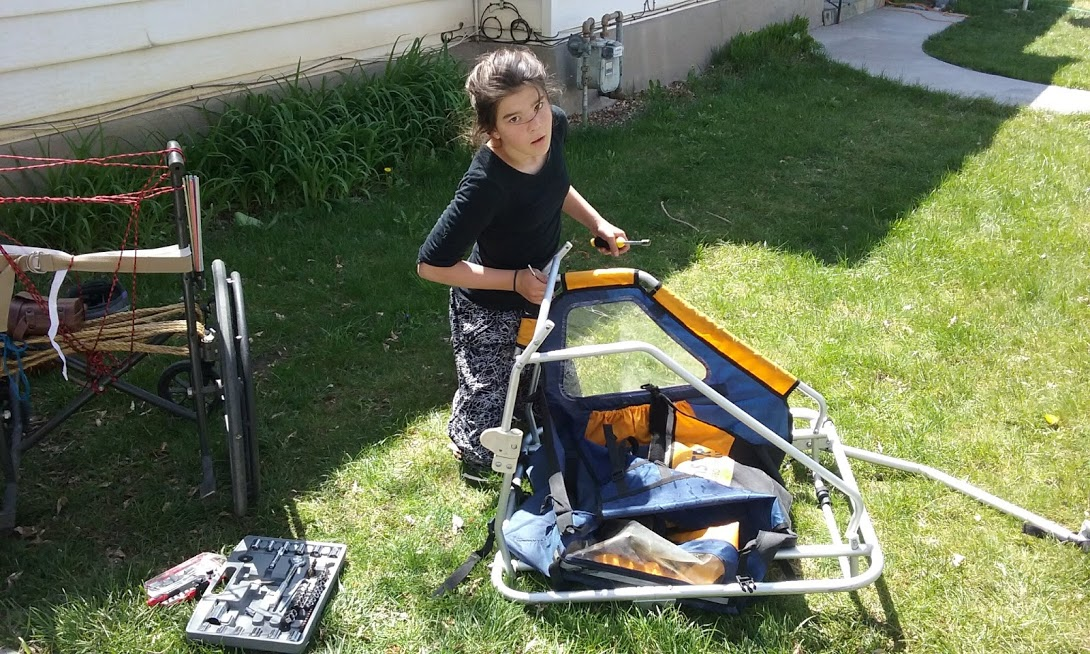 Wednesday was a packing, loading, storing frenzy from shortly after sun up to after sun down. Signing and funding for the new owner was on Thursday. We had planned to be out Wednesday night. But we didn’t make it. Eric and I discussed and strategized for the last of our move. We were 100% out at 1 pm. The new owner was ready to move in early Thursday afternoon.  Wheew. It was close, too close. But we made it.

This move was different than any other move we have made. We have never ever used a storage unit. We have never had to purge so very much. A few people asked how they could help, but I didn't even know what to ask for.  We did have 2 families come over to help pack, load, stack, and transport. Such a blessing.

I was talking to myself while packing the kitchen.  My friend was rather entertained at my dialogue.  She asked me questions, seeking understanding.
I know I talk to myself, but I was not aware of just how much until she commented.  I know I have a LOT of quirks and yet I felt so comfortable, accepted, and loved despite my weaknesses and shortcomings.  I love it that the women in my home school group seek to build each other up.
So much of the world tries to tear down our individuality and fit us into nice neat boxes.  So we eventually give up being ourselves.   Here is a music video that expresses this so well.
I love it that I can be myself; daring to be vulnerable, and be embraced and encouraged rather than being ridiculed and ostracized.  I am part of something good and bigger than me.  Some of us don't fit into boxes, and none of us has to.

Friday was the last day of classes for our homeschool group. I have associated with some truly amazing women and their children. I have learned much, as have my onions.

We joked about giving Piglet a lion cut…. He looks a little silly, but at least his mats are gone for the most part. 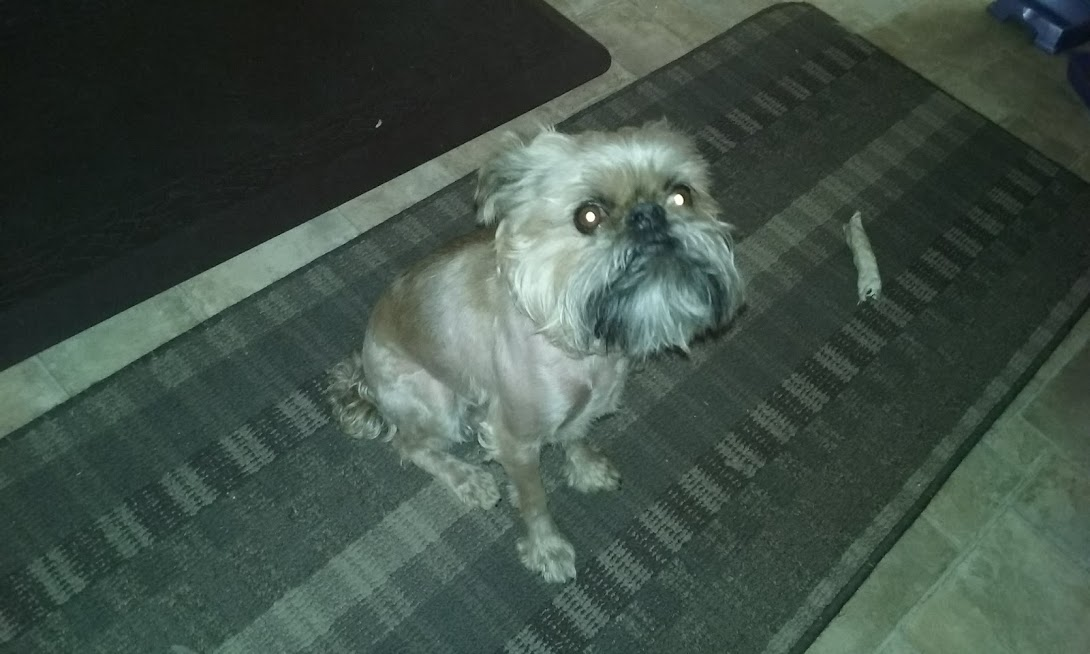 Amelia competed in the last speech and debate tournament for this school year. It was not just any tournament, but the Spring Finals. Rather than 4 rounds and counting up points  and ranks to determine the winner, the groups were narrowed down to semifinals and then to finals. Amelia made it to the finals. The top 6 competitors were called to the podium, “in no particular order.” 6th place was announced. Then 5th, and 4th. The 3rd place trophy was handed out. Then 2nd place was announced and Amelia had won 1st place in her category - impromptu. Another happy moment for Amelia. Another trophy to add to her growing collection. A very long 9+ hour day, but worth the effort! 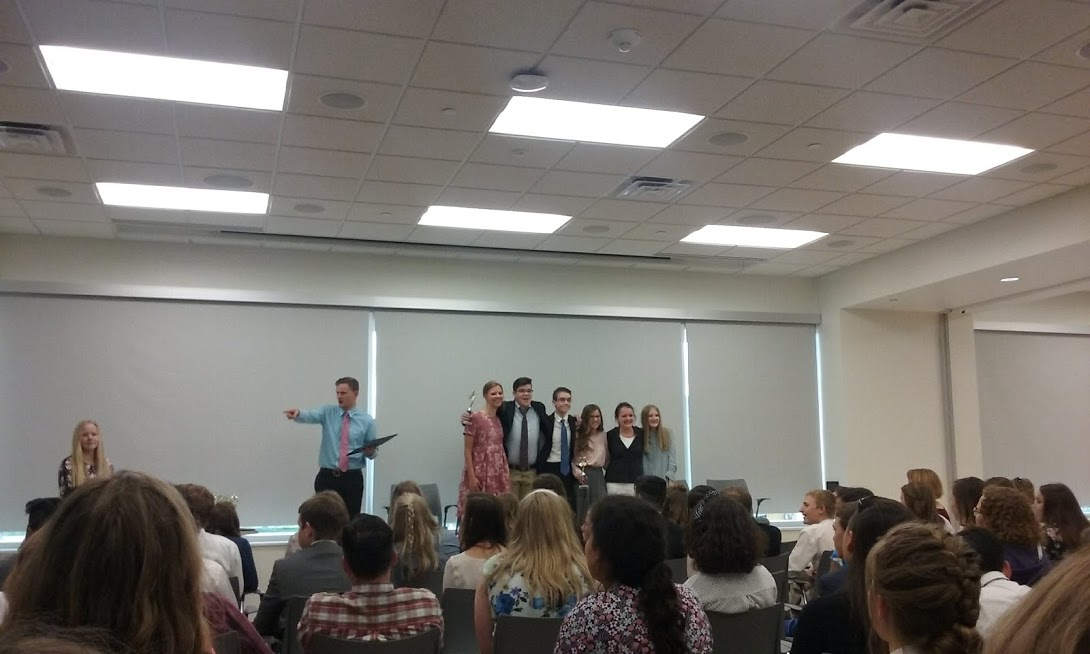 You can watch Amelia receive her trophy here.
By BackToGeorgics - April 29, 2018
Email ThisBlogThis!Share to TwitterShare to FacebookShare to Pinterest