My dad decided to join us for hunting season was a few weeks ago.  It started on a Saturday and he told me he was coming on the Tuesday or Wednesday before.  What a nice surprise.  Super exciting! 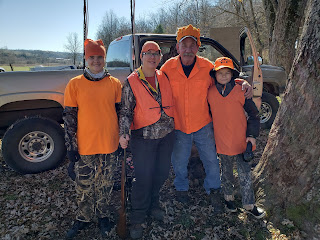 The first day, papa and Elanor went to sit near the trash pile, remember that?

I took Scott and Naomi with me.  We walked to the opposite end of our property, cut across and started walking toward Papa and Elanor.
We flushed out 2 deer, but they looked really small.....  Then 5 or so more, but they were running too fast to take a shot.  No go.
Our neighbor said we could shoot anything we wanted in his fields. So we sat and watched the neighbor's field.  There was ONE.  Not enough time to take the shot. Bummer.

Papa turned onto a road that was meant for 4 wheelers.  Scott and Elanor were with us in the back of his truck.
We drove over a tree.  The trunk was over the "road" but the top branches were "passable."  I never would have believed it.  But I was in the truck as my dad confidently drove on through.
He drove through a wet boggy area.  I thought we would get stuck in the mud, for sure.
He drove through 2 trees so close that we had to turn the mirrors in to get through.  I would have turned back at the first sight of any of those, but my dad is amazing - we made it through each obstacle like it was nothing.
Elanor and Scott gained the off-roading experience that I remember driving around with my dad in Bishop, CA and Angeles National Forest.  Such fun memories.  And now my kiddos get that too.

Another day we drove all over the place.  We stopped for lunch, and then for ice cream.  Of course, "Betty Lou" got treats too.

We also drove through some public lands.  We stopped for a few hours.  Papa took Elanor and Scott, and I stayed with Naomi by the truck.  Naomi was resourceful - she cleaned out the truck, putting trash in bags, and organizing the blankets and clothes.

At on point Betty Lou would not move out of the front seat, so I shared with her.

That night we got home after dark, having been gone for about 8 hours.  We were cold, tired, and HANGRY.  Thankfully Amelia had made us dinner and it was waiting for us when we arrived home.  Seth and Eric worked all day, be they were there for dinner too.

It was really nice to see Papa!  We really missed Grandma ma though.

There were a couple of days of hunting left after my dad departed empty handed.  So I headed up to the trash pile.  As I was walking down the road, I spotted a doe that had jumped the fence into my neighbor's field.  I watched it walk across the field - through my scope.  Another deer!  She saw me and decided to go back.  The first followed her.  HA! They were both back on my property!  I made it to my spot and waited.  About 15 minutes later, I spotted 2 ears through the brush near the road to our pond.

This was my view: On the left is our access from the road.  It curves around.
On the right, the road meanders up to the pond. 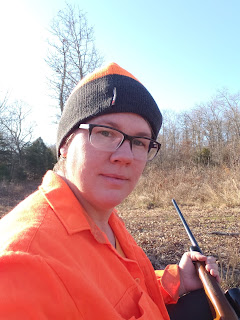 Back to the story...
So there I was SUPER EXCITED that the two does came back to the exact spot I wanted them to.  The first one walked into the road, broad side!
I took a few deep breaths to calm myself down and to steady my shot.
I took aim.
Fired.
NOTHING.
WHAT!?!?!?!?

In the beginning of the week, I discovered that my safety didn't work.  SO I was super careful with my gun.  Then it fell.  Now, in this moment, I could not get it off of safety.

I opened the bolt to be sure a bullet was in the chamber.  Yes.
Aimed and Fired.
NOTHING AGAIN!

I tried all I could think of.
I fiddled with my gun as the two deer noticed me, but didn't seem to care too much.  They continued across the little road and I frantically tried to get my gun to fire.
Finally I pulled the bolt out and back as far as I could, kind of slamming in back.
It made a metal "click" sound.
It was off of safety!  But it alarmed the deer.
I was a bit frantic at this point.
It had been well over a minute.
The first deer had disappeared into the brush on and the second was facing me right on the edge of the road and the thick brush.
After 5 prior failed attempts, I took aim one last time, forgetting to hold my breath, and took a shot.
Well good news: the gun finally fired.
Bad news: it was a complete miss.
I have to confess that this story is rather embarrassing.  But I learned a LOT from this experience.
And... it is what happened.

I did go up the next day.  It was windy, and there was no way the deer were going to walk where I could see them.  Eric even walked from our house toward me and heard several deer moving around.  He saw 3 or 4.  I saw ONE run very fast out the access road.

I am severely disappointed that I did not harvest a deer this year, and I have only myself to blame.  I am grateful that my family does not depend on me to provide meat for them at this time.  While I do not eat cows or pigs, the rest of the family does.

I imagined what it was like for early settlers with no grocery stores and what it is like for people in need. Hunting is free on your own land here.  You do not need a license to hunt in Missouri.  I know of many people who even process their own meat.  This is such a blessing to those who strive to provide for themselves.  Better quality meat at the cost of your own effort.
While I do not want to come home empty handed to hungry people, I know that could be a real scenario for some.
So I say "maybe next year."  But I do not say it lightly.

In April 1978, (one of my all time favorite general conferences) A. Theodore Tuttle, a leader in the Church of Jesus Christ of Latter day Saints, said:

“Live within your means. Get out of debt. Keep out of debt. Lay by for a
rainy day which has always come and will come again. Practice and
increase your habits of thrift, industry, economy, frugality.”

“Let every head of every household see to it that he has on hand enough
food and clothing, and, where possible, fuel also, for at least a year ahead. …
Let every man who has a garden spot, garden it; every man who owns a farm,
farm it.”

“Cash is not food, it is not clothing, it is not coal, it is not shelter; and we have
got to the place where no matter how much cash we have, we cannot secure
those things in the quantities which we may need. …
All that you can be certain you will have is that which you produce.”

“We must purge our hearts of the love of ease; we must put out from our lives
the curse of idleness. God declared that mortal man should earn his bread by
the sweat of his brow. That is the law of this world.”

I think this counsel applies now more than ever.


By BackToGeorgics - December 18, 2019
Email ThisBlogThis!Share to TwitterShare to FacebookShare to Pinterest