Last year we went through 200 gallons of propane in less than 30 days.  So we got a second, larger tank.  We also decided to buy a wood burning stove for about the same price as one refill of the 2 tanks of propane.  We put the stove in the back of the house, in the utility room, because that is where the chimney for the old disconnected and removed wood burning furnace was.

Eric installed a fan that was left here by the previous owner.  When the temperature got hot enough, the sensor would kick the fan on and blow the warm air into the kitchen.

The method was better than nothing, but was not the best  I would often find myself and others sitting on empty joint compound buckets, huddled around the fire in the unfinished, uninsulated room.

Earlier this year, we had a new chimney installed in the front of the house, where we actually exist during the day.  The dilemma was what to do with the floor.  Eric and I have agonized over this. 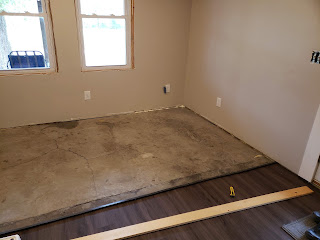 This area is severely cracked, sounds hallow in some parts, has a patch of cement that bumps up, and also has some pretty rough gouges.

I actually gave Eric an ultimatum.
"I need the wood burning stove in the front of the house and in working order before your next travel for work trip!"

I was ok with the original floor (I could put a rug over most of it) or willing to cover it somehow.  Eric had to be the decision maker.  He decided to put brick down.  Yay. Decision made.

I found a brick store - the ACME brick company.  Thoughts of Wile E. Coyote cartoons with ACME everything abounded.

brick.com
Acme Brick. The Best Thing To Have Around Your House.

Eric and I walked into the store and found what we both liked - the same sample- in less than 5 minutes, maybe 2 or 3.  Then I proceeded to look at everything in the store to "be sure" I really did like the one I originally picked the best.
Yes!
Then we got to the sales guy.  The brick we picked is a concrete brick, not a clay brick.  Questions as to whether it will hold up to the weight of our wood burning stove were raised.

Back to the drawing board.  I looked at ALL the clay brick options and didn't find a single one I thought I could remotely live with.  The sales guy went to the "expert" brick guy and came back to tell us the concrete brick should be fine.
OK!  Ordered!
I picked it up 2 weeks later the same day as our home school group in Springfield.  Taking the truck instead of the SUV was a logistical adventure with where the onions sat, but we got the brick safely home.

Eric and I have never laid tile or brick.  This process is completely new to us.  We decided to get cement backer board, mortar, and the suggested tools.

The morning of the planned installation, Eric thought it would be better to do self leveling cement.  OK.

The floor transformed into a beautiful shiny marbled super smooth floor.  I would have been happy with it right there, but we feared cracking and we had the brick already......

We had to wait for that to set up and cure.
Then to lay the backer board. 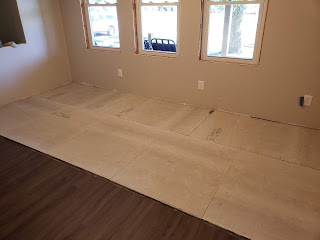 Another waiting period for that to cure.
Then to lay the brick.

Laying the brick was an involved process.  We streamlined with assigned duties and made the process as efficient as possible.

Elanor globbed the mortar down and cleaned up any extra.
Eric spread it and troweled it.
Amelia back buttered the bricks.
Scott and Naomi held the back buttered bricks to hand to Eric. 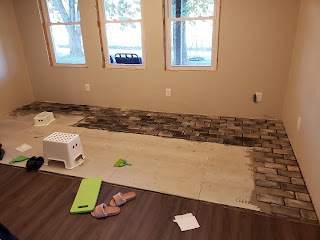 Then we really got going.
I back buttered.
Seth and Amelia cut some bricks.
Scott opened new boxes as we needed them.
Elanor took a break, with others attempting to fill in.
The onions held back buttered bricks so Eric could do a larger area and put several down at once.

The box suggested that you seal the TOPS of the bricks to help prevent the mortar from bonding to the brick.  But to be careful not to allow any spillage down the sides of the brick because it wouldn't bond where it needed to.  Well, I can say I tried really hard.

Then on to "grout."  But brick has mortar, not grout.  So on to mortaring, but with a lighter color.

Eric and Elanor came up with the idea to pipe in the mortar with cake frosting bags.  OK.
We had a little bit of a learning curve with what consistency worked best.
We had mixers, bag fillers, Eric pipes, I troweled.
I used a half circle tool for a very short time.  It made the floor rather bumpy.
I then tried the "wipe it with a sponge method."
Winner winner chicken dinner!

I was rushing to get done to go to a meeting at church... The first part was ok, but as time went on the cleaning job became increasingly sloppy.

I spent the better part of a day chiseling and wiping off the excess mortar. 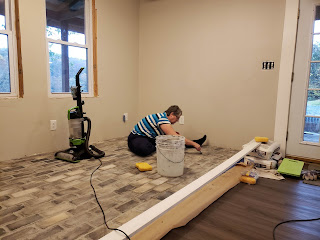 The final step was to seal the whole thing.  I liked the wet look more than the dull look.  So we switched to glossy sealer.

Eric left on a Saturday.  I sealed the floor late Friday night after a fun filled date night.  Eric, Scott ,and I moved the stove to the front of the house Saturday morning.  I was personally very thankful for our 2 moving dollies.

I plan to have a small seating area on the left.  We will install the trim around the windows after they are replaced.  We used some baseboard trim to keep our little dog out of the area while we were working and while it was setting.

Location, location, location!
The stove has been in the front of the house for a couple of weeks now.  I absolutely love it!  Our whole house is warmer.  The heat goes up the stairs, into the living room, and even into the master bedroom without turning on the central heating and cooling fan.  We are cozier and we are one step closer to a completed home.  Win - win.

And..... We are back to hovering when it is cold.  But on actual stools rather than buckets this time.  Ha ha.


By BackToGeorgics - November 12, 2019
Email ThisBlogThis!Share to TwitterShare to FacebookShare to Pinterest