The Rise and Fall of our Chickens

We were given chickens last year.  We started out with 6 chickens, 1 1/2 chicken, and 1 rooster.
One of the chickens was really broody.  She picked a spot above the office on our shop in the pink fiberglass insulation.  Um,  fiberglass!  4 of the 5 eggs hatched!  Eric was out of town and all of the sudden we needed a coop for the momma and babies.

Eric was out of town and all of the sudden we needed a coop for the momma and babies.
The onions and I constructed a small coop.  We purchased chicken wire and some staples.
Everything else was found around the house.

We used a staple gun and the nail gun.
I discovered that Amelia and Elanor are more comfortable using power tool than I am.

It took two days to complete.
We went up to her "nest" and brought them down.

We kept them in the coop of a couple of days.
Then we added them to the "out in the morning and in at night" routine along with the other chickens. 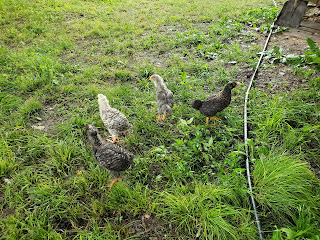 Then, we were going on vacation......  We constructed a chicken run.
We intended to contain the chickens and make it easy for or neighbors to care for them. 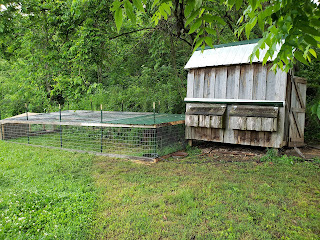 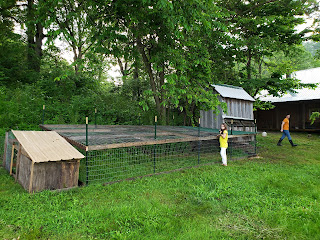 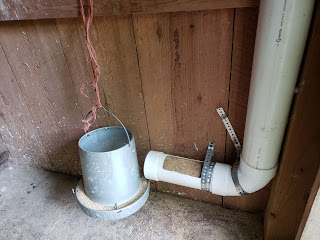 Complete with a feeder that would last a week.

While we were gone, raccoons dug under the fence and killed all the chicks and one chicken in one night.  Our neighbors boarded up our entry to the run at night.

After our return the chickens seemed to be doing ok.  Then the chickens were picked off one by one.  One of the onions left the coop open an hour after dark.  No chickens.  We found them all over, but one was missing.  Another night we were out late and came home after dark.  We were minus another chicken.  Ugh.

We were down to the 1/2 chicken and the rooster.  I had planned to harvest them on Thursday.  But.....  Scott came running in from letting the chickens out.  He promptly informed me that there was a raccoon IN the chicken coop.

The raccoon chewed through the 2 x 8s over the egg boxes to get in.

We guns we have are not appropriate for raccoons.  We called the neighbor.  He came over and shot the raccoon for us.  It is such a blessing to have wonderful, caring, and helpful neighbors.

The 1/2 chicken was raccoon dinner.  The rooster managed to survive.  His head was black with dried blood all over his head from the scratches.

I harvested the rooster with Elanor's help.  How quickly I forget to do things.  It was an ordeal but I did it.

I cleaned up the raccoon.  It was much heavier than I had anticipated.  about 30 pounds.

Now everything is empty and clean.  Hopefully this is the end of the raccoons for a while.

We will begin again....   Eventually.

By BackToGeorgics - August 06, 2019
Email ThisBlogThis!Share to TwitterShare to FacebookShare to Pinterest