Another week in Missouri


When I last wrote, we had a verbal agreement to buy the house from the sellers.  The Nettles were going to handle the title company and we would get a local bank account and begin the loan process.
We received a call from them on Thursday.
The title company would need something in writing.
Oh yeah....
So we drove to our new place again to complete and sign a bill of sale document provided by the title company.  We agreed on the closing date of August 23.  5 weeks!
We plan to return to Utah to visit and to get our things.  More details to come. 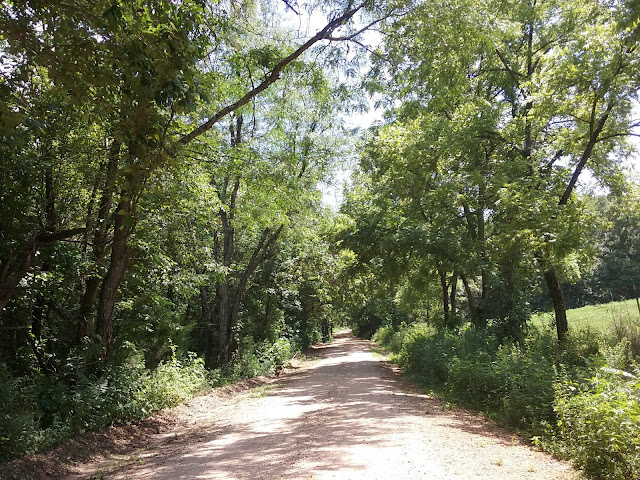 The well maintained county dirt/gravel road to the property. 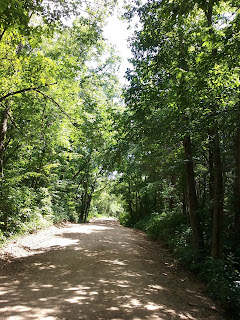 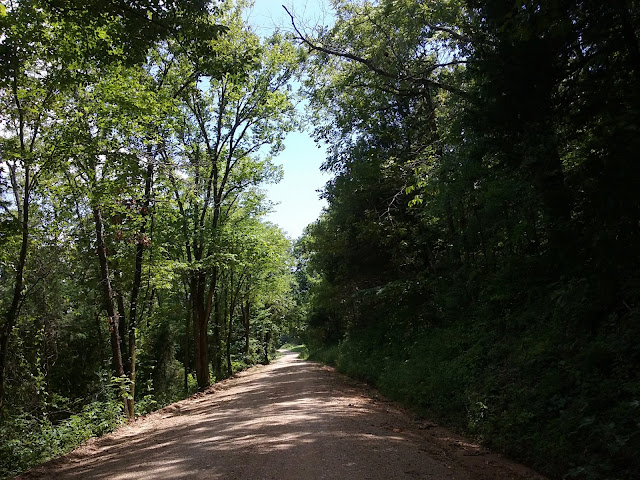 The clearing just ahead is where the house is. 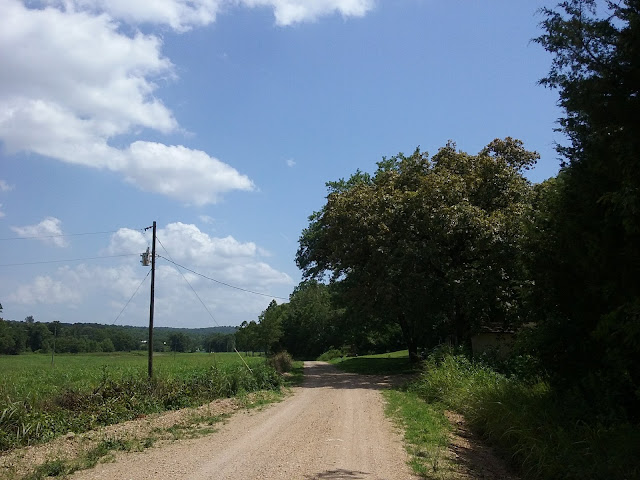 The neighbor's field is on the left.  Our place is on the right. 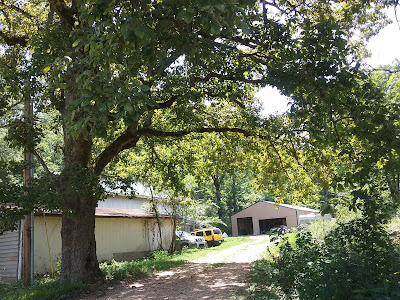 Turning into the driveway, approaching from the north.   The wood shop/2 car garage is on the left
and the house is to the left of that with the large shop in the background. 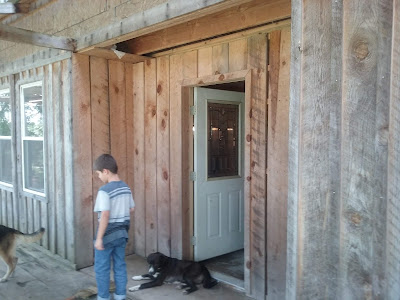 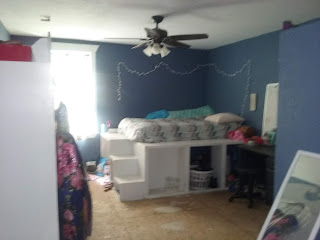 The 6th bedroom, with a built in platform bed and storage below. 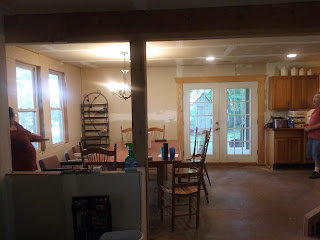 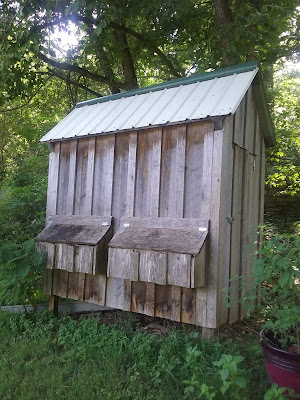 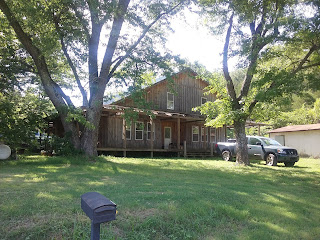 The house from the southern approach.

The onions have spent quite a bit of time designing their rooms - wall color, bedding, decor, closet organizers, etc.  They are excited too! I am beyond excited.  I even spent a few hours on pinterest, pinning for the first time ever, collecting ideas for our new house. 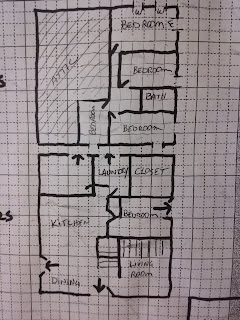 Here is the general layout.  (Not to scale.)  There is a plumbed full bath and a utility room in the attic space, in the middle of the upstairs.  Then there is another bedroom next to the one at the top of the page and still attic space that runs the entire length of the house above the dining, kitchen and utility areas.

There is another full bath plumbed in the laundry/mud room as well.

Squires is the name of the town we will use for our address.  But is Squires actually a town?  Hmm.  The term "don't blink or you'll miss it" literally applies here. 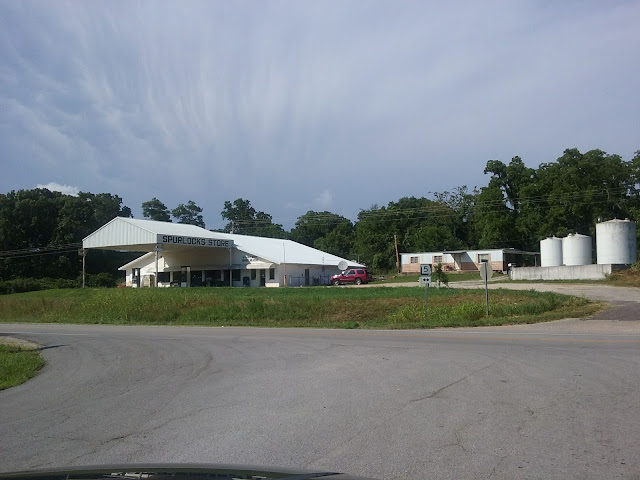 Squires, MO: a general store with gasoline pumps out front that are no longer in use and an adjacent post office.  That's IT.

We heard that there are work gloves next to the tuna fish, pliers next to cream cheese, and clothing displays from the 1970's.  We thought we would stop to take a look. 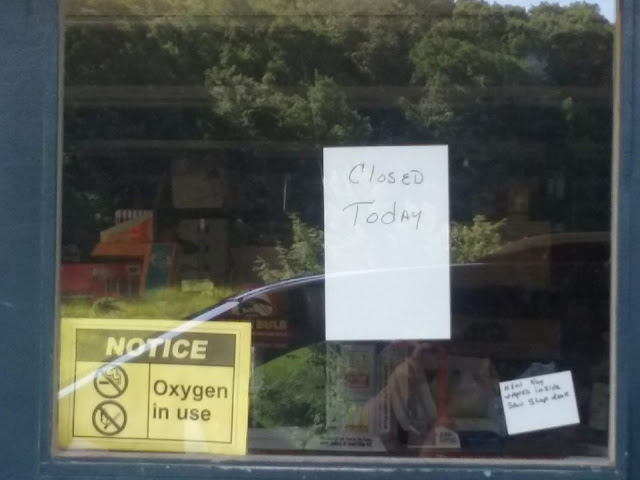 Something must have come up.  Even with set operating times, one can never be sure....

We were invited to go to Family night this week to the Bishop of the Mountain Grove ward.  There are over 50 people that live in the house.  The heads of the household have 25 children!  They have adopted the majority of their children.  They have adult children with their children that also live there.  I don't know details, but I get the distinct impression that they are living the law of consecration.  The family is amazingly wonderful.  They exude love, genuinely, and the Spirit is ever present.  I didn't personally talk with everyone, but they are definitely worthy of emulation. 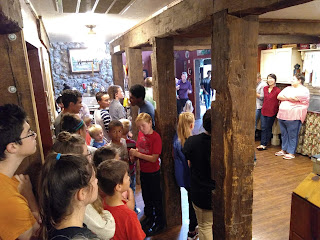 In honor of national ice cream day, they served waffles and ice cream.
Gluten free was no problem.  Awesome!  Super yummy.  This is the line. 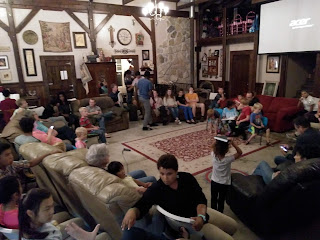 This is the largest Family home evening lesson I have ever been a part of. 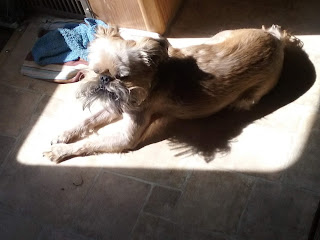 The honeymoon period in the RV is officially over.  We have been in one place for over 3 weeks now.  We have done and seen a lot.  We are hanging out in the RV more and more.  Our little dog, "piglet" has even chosen a spot he prefers.

We attended an outdoor musical portraying the memories of Laura Ingalls Wilder.  My very first thought after we got tickets and were walking down was "this would be a perfect Shakespeare venue!" Good size stage with 4 entrances. Ample seating - with backs and leg room too.  There are a lot of homeschoolers here, but I have not met any TJEd-ers.  We had dinner with a wonderful family last night and they think they know a TJEd family.  We shall see... 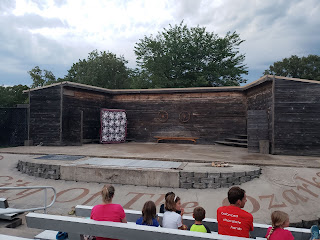 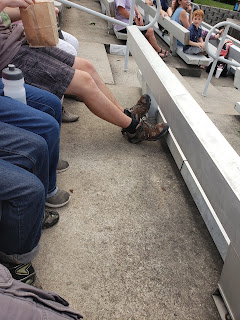 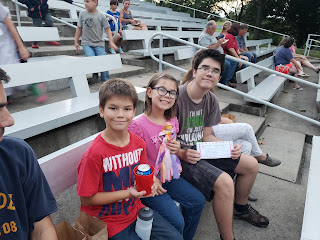 There was a drawing at intermission.  Our family won 1/2 the prizes.
Seth, a $5 gift certificate to the local ice cream shop.  Naomi, a rag doll.
Scott a soda and commemorative cup. 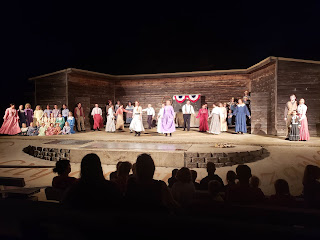 I GOT A NEW PHONE
I have needed a new phone for several months now.  We put off getting one because Eric was unemployed.  Then we decided to pack up and travel east to find our new home and I decided I could wait until we had an address before getting another phone.

There was a day, over a decade ago, when we chose not to afford cell phones.  Eric said good bye and headed to get gas and go to work.  About 2.5 - 3 hours later, I received a phone call from Eric's manager asking me where he was.  I thought it was a joke and happily told him that he left for work at the same time he leaves every morning.  Then we realized that Eric was not at home and not at work.  WHAT?!?!?

The receptionist called hospitals and highway patrol.  I went to the gas station.  Nothing.  I was crying hysterically, calling parents to let them know.  I was incoherent and an absolute mess.
I caught a tiny glimpse of what people go through when family members go missing.  Nothing good.

I received a call from Eric 45 minutes to an hour after his manager called me.  Eric forgot to get gas at our local CNG station and went to 2 or 3 other stations that were not in service or in the process of being fixed, never thinking to call and let anyone know.

I told Eric that he could come home when he had a cell phone.  I think I said something along the lines of "don't come home until you have a cell phone."

Ever since then, Eric has decided on the phones we have and the service provider we use and has handled billing and everything pertaining to cell phones for us.


Well.....
Out here in the rural land of southern Missouri, there is ONE provider worth having.  Verizon.  We learned that other providers say they use Verizon's network, implying that it is the same coverage.  However, other companies lease the towers individually and it's usually not in rural areas.
Our "resource guy," brother Wilber, (as we call him because he is our only contact in the ward and has contacts for everything we have asked him about so far,) sent us to a fellow ward member that works at Verizon.  I am excited to have adequate cell coverage and be able to send text messages in seconds rather than after hours, and sometimes days, of retries.

I'm just going to admit that I am not the best customer.
I give sales people a hard time, especially when I feel nickel and dimed.  It was no different this time around.  The words cynical, sarcastic, obnoxious, embarrassing come to mind.  Poor Eric.  I should not have gotten involved with cell phone stuff.
You might think that I would behave myself since we were referred to  a member of the ward we will be in.
Nope!
I told brother Winterton that I wanted a phone good enough that I could take videos with.
TA DA - the latest and greatest.
Is there ever anything less at the actual store worth looking at, when talking to the sales person?
ok - sign me up.
I might as well have what I want, especially since we all went into the store to get new phones and switch service providers.  Who doesn't want the top of the line?  I got the Samsung Galaxy 9+.

Now some may think that this is no big deal.  I know many people who upgrade every year or two, when the newest model comes onto the market.  Awesome for them.  But this is not generally what we do.  Eric will buy used or refurbished or the least expensive phones that meet our needs, and we keep them until the operating system is out of date or the memory is all used up with update garbage.

Use it up,
wear it out
Make it do,
or do without!

That did not apply in this scenario!

So why....  Well, I want to VLOG.  Anyone that has heard me tell a story seems much more entertained by listening in person than by reading my writing of events.  Although, I have received numerous compliments on the way I write.   (thank you!)  So I will be adding videos in the future.

By BackToGeorgics - July 23, 2018
Email ThisBlogThis!Share to TwitterShare to FacebookShare to Pinterest