About a year ago, Grandma Robin and Aunt Donna came to visit.  They had a couple of conversations with the onions about careers and what they want to be when they grow up.    Well, that got them thinking....


Seth has always wanted a career working with animals.  He did some research on careers and thought about things.   A couple of months later he decided he wanted to be a farrier, shoeing horses.  I suggested a school, but he had done his research and had found the one he wanted to attend.  He asked if we could go to the school and check it out.

The moment we arrived, it felt GOOD.  The school is a family business and they love what they do.  All the students are intent on their work, but cheerful, and very respectful.  There was a lot of positive peer pressure and encouragement.  I felt like we had found the TJEd commonwealth (our home school philosophy) for horseshoeing.  Everyone was positive and upbeat.  I learned that many of the students attending were young and came from homeschooling families.  After the tour, I was confident that Seth would love his experience at this school.

While we were at the school, I received a call for Seth.  Unannounced to me, Seth had applied for a job.  WHAT!  They wanted him to come in and fill out paperwork.  So Seth went in and he began working within a couple of days.

I was a bit nervous about Seth going away to school.  The owner/lead instructor assured me that he had previous students with Autism and that in his opinion might be the better student.  He also stated that his youngest student was a 13 or 14 year old Amish boy, that he had had several students begin at 17.  OK  I felt good about that.   But then I was nervous for Seth to work in the fast food industry.  I know this job was a means to an end.  I was super impressed that he took such initiative.  But part of me wondered if he could handle it.  Fast food can get hectic.  This would really reveal to all just what he was capable of.

I am proud to report that Seth has done wonderfully at his job. He has had his share of super busy and overwhelming moments.  He has made a few mistakes.  But all in all, he has succeeded in his first job.  His managers like him and have said that they wish they could clone him.  While fast food is not Seth career choice, I am grateful that he excels in the job he has. 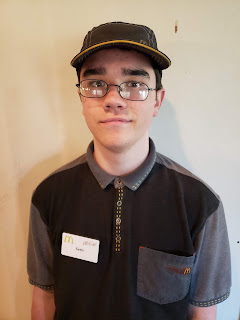 When Seth started working, he was 16, but did not yet have his license.  Another hurdle.  Driving did not come so naturally for Seth.  I gave him a deadline by which to obtain his license.  And he did it!

Seth desire to go to vocational school has motivated him in ways I had always hoped for but had sometimes questioned.  I am so very proud of him!

Well.....  We realized that Seth would NOT have the tuition up front to go to the school of his choice.  He has zero response from any of the scholarships he applied to.  And, he has less in the bank than we had projected.

So in my scrambling to help Seth, I talked to a lady in our ward that is in the horse business about possible scholarships.  She suggested a different school.  I looked it up.  It was a fraction of the cost and they offered financial aid.  Seth could pay cash for this school and avoid going into debt!

But.... I got the impression that we should go in person to check it out.  Seth got a few consecutive days off during the time Eric had taken his vacation time and so we went. 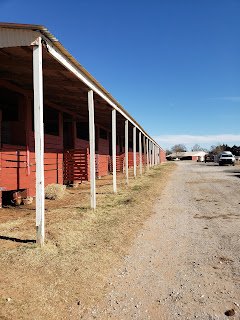 Um.... NO!
On paper, everything looked so perfect, cost, assistance, program, recommendations.
It didn't feel right.
There were people cussing.
The instructor we talked to was chewing tobacco and was constantly spitting on the ground.  As we walked around, I saw cigarette butts everywhere.
Every staff there seemed to be going through the motions and doing their j-o-b.  That was the extent of it.
Even, Eric, aka Mr. Practical, did not want Seth to attend that school.

We were already out on the road and there was one more school we could go see.  It made our trip home longer but we went.

The 3rd school was okay.  Not spectacular, not awful.  It was also in the middle as far as tuition.

"Sometimes, you get what you pay for."

That can be different things for different people.  I think for Seth it is learning his trade in and environment he is comfortable in.

Seth had a big decision to make.  He weighed the pros and cons and decided to attend the 1st school.  His original top choice.

I realized that although Seth is not actively committing himself to God and living the gospel with intention, he can feel the Spirit and he does not like it when the Spirit is absent.  I doubt the first school is of our faith, but they are obviously Christian.  I am excited for Seth to flourish in that environment!


In case you are wondering....
We do not pay for college or vocational training.  If our children want it, they have to want it bad enough to do what it takes to get it.
Seth got a job as soon as he decided on horseshoeing school.
Seth made an effort to apply for financial aid, but horseshoeing schools are not something FAFSA is will loan money for.  Seth has no assets of his own and cannot take out any kind of traditional loan.
The school of his choice has ONE class schedule per year.  It starts in March.
Unfortunately, Eric and I do not have the full amount that Seth needs.  Tuition is required to be paid up front, in full.  We will take out a loan and Seth will repay it.


I have made it clear that when the onions are 18, they will move out, get a job and pay rent, or be in school.  That has concerned them from time to time.  I reassure them that by the time they are 18, they will want to launch, and they will be in a place to make it possible.

I am so, so, so excited for Seth.  I am looking forward to watching the next part of his life unfold.


By BackToGeorgics - January 13, 2020
Email ThisBlogThis!Share to TwitterShare to FacebookShare to Pinterest