Scott loves soccer!  It is his favorite sport.  The only sport he cares to play.

Last Spring I missed the sign up date.  I gave my information to the lady that coordinates soccer and she said I would be on the list to notify us when the next time soccer was about to begin.  Um.  Nope.  However, we have some church friends with boys that play soccer too.  Scott got signed up and our friends were Scott's coaches!

Scott enjoyed himself.  He was goalie much of the time.  It worked out perfectly because the team didn't have a goalie.

Scott was not often busy because the team was usually at the opponents' goal.

Sometimes the ball made it down to his end of the field.

Scott practiced anytime he could talk one of his sisters into playing with him.
It paid off during games.

Scott was not the best at drop kicks when he started.
However, he was soon kicking to midfield with ease.

Most of his blocks were straightforward and uneventful.

Scott blocked a goal and kicked it back out into the field.  It went straight to a player of the opposing team who was in perfect position to make an aggressive goal shot (almost a fast action penalty kick).  Scott quickly realized his error and dove for the ball.  Amazingly, he blocked it..... again!

Though the season lasted only a few short weeks, Scott learned much, improved his skills, and let very few balls get past him.  There were times everyone thought the ball was going in and to everyone's amazement, even Scott's, the ball was deflected.

One time a ball was coming in very high.  Scott jumped and made contact with the very tips of his fingers.  The ball shot straight up and went over the goal rather than in.  Another time Scott blocked a ball destined for the goal.  He leaped parallel with the earth deflecting, but not capturing.  The ball hit the post and bounced back into the field.  Thankfully members of his team backed him up and got the ball down field with no chance for the other team to try again.

I asked Scott if the scrapes were worth the block.  He looked at me perplexed: as if there were a choice.  Of course!  I figured out battle wounds from soccer are like mini trophies - reminders of the effort, hard work, quick reflexes, and successes.

Scott's team was undefeated and he allowed only THREE goals the entire season.  The end of season tournament proved to be the same. Undefeated! 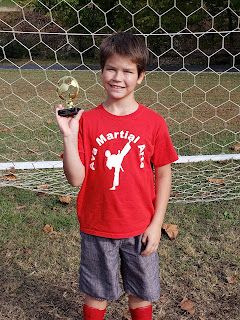 Note:  Ava Martial Arts sponsored the team Scott was on.  We might try that too.
By BackToGeorgics - October 29, 2019
Email ThisBlogThis!Share to TwitterShare to FacebookShare to Pinterest