We made a conscious effort to focus on giving this year.

The onions and I volunteered at a food pantry and helped get food to families in need.  It was not glamorous and it included a lot of standing around.  We did what was needed and everyone was able to contribute.

We also became aware of a family in our ward (church congregation) that needed some help.  We decided to provide gifts for the family.  We went shopping as a family.  It was great fun to pick stuff out for a family we really don't know.  Some of the onions said it was even better than buying gifts for their own siblings.  The onions also donated some of their own money to help purchase the gifts.
We set a budget and went way over.  We spent more on the other family than we did on ourselves.
The girls (mostly) helped me wrap the gifts.

I took the onions to a local Ballet performance to see the Nutcracker!  I remember going when I was a girl.  Lovely!

Most of our family participated in the program.


Scott and Naomi sang a song with another girl their age. 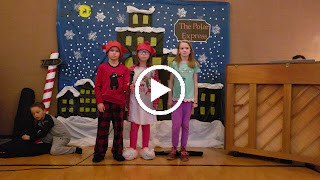 Amelia played a medley on the piano.  (not filmed per her request) 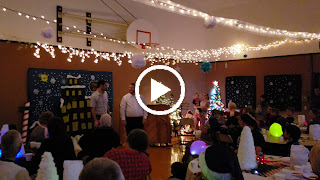 The theme of the evening was the Polar Express -
with fabulous decorations, good food, hot chocolate, Santa, talk of Christ, candy and bells.

Eric and I have weekly personal interviews with each onion.  During this time, Amelia suggested that we go to Utah for Christmas.  I thought "fat chance."  However, the more Eric thought about it, the more he wanted to go.  He had already taken the week off of work, so all we had to do was to get someone to care for the animals and to secure a place to stay. Easy peasy.  Thank you!  Thank you!

We decided to surprise Eric's mom at her Christmas party.  We drove straight through stopping only for gas, quick bathroom breaks, and dinner. 21 hours!
We hid in Steven and Nancy's basement and listened to Mimi's family arrive.  Then we heard Robin and Aunt Donna arrive.  Steven said that he had a gift for Robin and sent his boys to get it.  We rushed up the stairs and yelled "Merry Christmas."  They were so surprised and stunned.  They had no clue. Perfect!
We enjoyed the traditional Christmas scones and a visit from Santa! 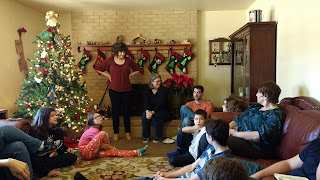 While talking about our ward Christmas party, we discovered that Santa's helper in our ward in Missouri is the dad of the Elder's Quorum president in Mimi and Karl's ward in Utah.
The world can be very small in our church sometimes! 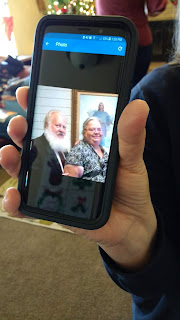 We visited with Brent and Misty's family too.

We joined Steven and Nancy's family in their Christmas traditions.  Wonderful!  We got to putting the gifts around the tree.  It was out of control, and so beautiful!

It was made even better by excited givers and eager receivers. 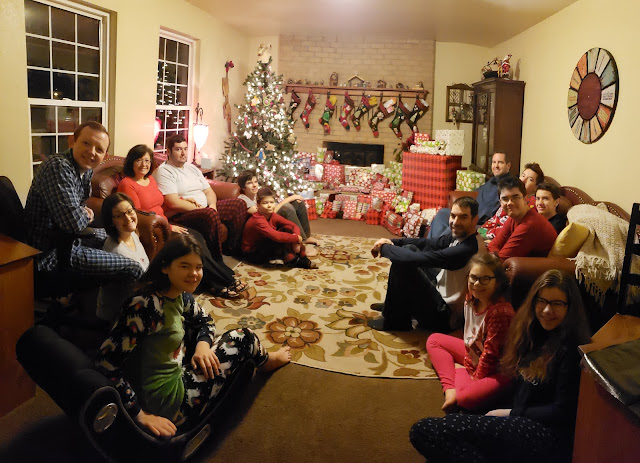 We went to Aunt Donna's log cabin that is being completed.  Beautiful!
We had to park and go in in the Eddy.  We saw the house, explored a bit, and even went snowmobiling!

The creek near the house

Snowmobiling with a sled. 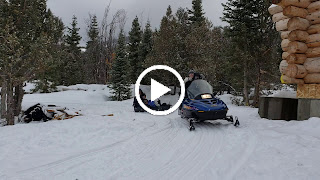 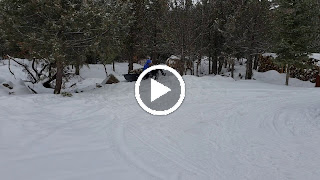 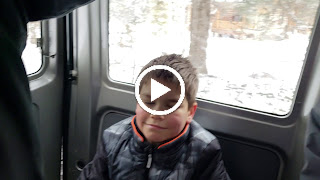 After snowmobiling and visiting with Robin and Aunt Donna, we went to the temple.  I left my phone in the car and it was too cold to pose for a picture anyway.
Our nearest temple is 4 hours away.  We have a choice of the St. Louis temple or the Kansas City temple.  In Utah there are 7 temples within an hour's drive and over 20 within 4 hours.  We have a greater appreciation for temples!

We visited with SO many people.  During our short visit, including family Christmas celebrations, we tried to visit as many people as we could.  We learned on the first day of venturing out to visit friends, that it was going to be more than we had time for.  The sincere reactions of excitement still warm my heart. The invitations in.  The discussions and connections.  It is wonderful to have so many friends.
We just couldn't get to everyone we wanted to.  (It was not a matter of making the cut.)  Next time.

Eric drove straight through on our return drive too.

I read in a Christmas card that "mas" means more in Spanish.  Christmas is really just More Christ.  More talk of Him.  More reverence for Him.  More yearning to be like Him.  More testimony of Him.
Christ lives. He is the Savior and Redeemer of the world.  Through Him we can be forgiven, wrongs can be righted, wounds can be healed, imperfect can be made perfect.  Miracles really do happen, even today.  He loves us.  He loves you.  All He asks is for us to love Him.
Are you closer to Christ today than you were a year ago?  Do you have a deeper understanding, relationship, or trust in Him?

By BackToGeorgics - December 31, 2018
Email ThisBlogThis!Share to TwitterShare to FacebookShare to Pinterest